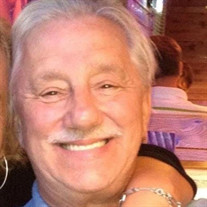 Anthony Joseph “Punch” Cirano was born on June 3, 1947 in Philadelphia, PA to Salvatore and Eleanor (Mangani) Cirano. Named after his grandfathers (Antonio & Atillio but both called Tony) Anthony was called “Little Tony” as a kid but is mostly known as Punch since his early 20s. Punch enlisted in the US Airforce in 1966 during the Vietnam war, was stationed at Reese Air Force Base as an aircraft jet mechanic. In 1970 he was honorably discharged with a rank of Sergeant. After leaving the military he worked for himself as an auto mechanic specializing in 1950s-70s Jaguars. During this time his CB Handle was Tony Jaguar. Later on he worked at the family business before working at the Showboat Casino as a floor manager. In 2014 he retired to Florida & took a part time job at Threshers stadium and the Philadelphia Phillies farm teams. Punch loved to watch sports especially football, baseball and wrestling. He enjoyed joking with friends and playing both cards and craps. He also loved to travel (having visited all of the lower 48) as well as out of the country. He will always be remembered as a dedicated father, stepfather, grandfather and husband. Anthony “Punch” Cirano is predeceased by his mother, Eleanor (Mangini) Cirano, father, Salvatore Cirano, sister, Eleanor Cirano and son, Stephen Cirano. He is survived by his wife, Annamarie; sons, Salvatore (Dawn), Anthony, Francis (Mary); daughter, Theresa (Elena); grandchildren, Michael, Alissa, Isabella, Gianna, Adriana, Sophia, Anthony III, Mary and Frankie and his extended family and friends from PA, NJ and Florida. To send flowers or a memorial gift to the family of Anthony Cirano please visit our Sympathy Store.

The family of Anthony Cirano created this Life Tributes page to make it easy to share your memories.

Send flowers to the Cirano family.