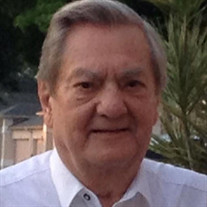 Anton Pichler passed away peacefully at home surrounded by his loving family on April 17, 2022 at the age of 91. Tony was born on Monday December 22, 1930, at his family home in Maribur, Austria…. now known as Slovenia. He had two older brothers and one older sister. During his youth, Tony worked on the family farm. Later, he developed a trade by becoming an apprentice to a tailor. In 1952, Tony traveled by ship to Canada. In Canada, he lived in Sudbury and in Toronto. He had various jobs, including farming, nickel mining and machine repairman. Little did Tony know that the knowledge gained as a machine repairman would be his ticket to moving to the United States. In 1959, Tony traveled to Germany. During this time, Tony met his future bride, Breda. They were married on July 27, 1959, in Oberhausen, Germany. Afterwards, they moved to Toronto, Canada and started a family and had two children. In 1969, Tony and his family moved to Holland, Michigan after being hired by Bradford Paper Company. Here he held various positions and worked his way up to Plant Superintendent. Tony retired from Bradford Paper at the age of 62. At this time, Tony and Breda enjoyed the snow-bird life. In 1992, Tony and Breda permanently moved to Highland Lake Community in Palm Harbor, Florida. Here they have met and made many, many dear friends. He enjoyed golfing, traveling, and playing cards. And he could never get enough of polka music and dancing. Tony’s greatest joy in life was his family. His pride and joy were his 2 children, his 5 grandchildren, and his 2 great-grandchildren. He is survived by his loving wife, of 62 years, Breda, and his loving children Betty Coon (Craig Coon) and Dan Pichler (Beth Pichler); his grandchildren Nicholas (Alexa), Matthew (Allison), Michael (Lindsey), Kathryn (Steven), and David; and his great-grandchildren Jack and Ben. There will be a private Celebration of Life Ceremony on Saturday, April 23, 2022. In lieu of flowers, the family is requesting donations in his honor and memory to the American Cancer Society (cancer.org).

Anton Pichler passed away peacefully at home surrounded by his loving family on April 17, 2022 at the age of 91. Tony was born on Monday December 22, 1930, at his family home in Maribur, Austria…. now known as Slovenia. He had two older brothers... View Obituary & Service Information

The family of Anton Pichler created this Life Tributes page to make it easy to share your memories.

Anton Pichler passed away peacefully at home surrounded by his...

Send flowers to the Pichler family.