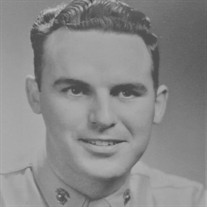 Berle Garris Sr., 93, died Sunday, July 25 at Seasons Hospice in Dunedin, Fl. His beloved wife of 69 years Anne was by his side. Anne, an accomplished writer, and editor interviewed her husband for an article five years ago. The following are modified excerpts from her article: Berle and his wife, Anne, have lived in their vintage North Clearwater Beach home ever since he retired as a CWO-4 from the Marine Corps in 1972 after serving 28 years. Berle served in assorted areas of the world from the frozen reaches of North Korea to the tropical paradise of Puerto Rico. His Marine Corps specialty was engineering working with various construction equipment including motor graders and tractors. He fought at the Battle of the Chosin Reservoir (November to December 1950.) In retirement he attended reunions of the “Chosin Few” veterans. He also fought during the Vietnam War serving two separate assignments, 1964-1965 and then 1968-1969. Berle’s best moment of his years in the Marine Corps might have been the time he was sent from active combat in Vietnam to represent the United States in a skeet match in Japan while serving on the Marine Corps Champion Skeet Team. Upon retirement, he purchased the small weekly newspaper owned by Anne’s parents, titled Beach Views. The paper was distributed on all the Clearwater Islands. Berle went from dealing with heavy Marine Corps equipment to selling newspaper advertisements, and creating them by hand, strip by strip of printed lines, glued in place. Berle had many interests. In Clearwater he enjoyed skeet shooting at the local skeet ranges. He also had a keen interest in flying. While on active duty, he had talked his way into the cockpit of every Marine Corps plane he ever boarded, frequently taking the wheel under the pilot’s watchful eye. In retirement, he owned both a Cessna 170 and a Piper Cub. In later years he and Anne were content to sit on the deck, greeting neighbors passing by and basking in the Florida sunshine. The Marine Corps emblem adorned most of his shirts and, on his collar, was a pin, “Rotary International, 43 years perfect attendance.” Berle was preceded in death by his daughter Nancy Anne Dean and his sister Georgia Lee Yelverton. He is survived not only by his wife, Anne McKay Garris, but brother Billy Garris, son Berle Garris Jr. (Cyndy), son-in-law Benjamin Paul Dean, and grandchildren Jason Benjamin Dean (Alisa), Nathaniel Berle Garris (Jordan), Heath William Garris (Ashley), and Lindsey Dean Brogli (Matt). He leaves behind a legacy of eleven great grandchildren: Evan Dean, Emerson Dean, Ella Dean, Kenna Brogli, Finnegan Brogli, Gunnar Brogli, Duncan Brogli, Penelope Garris, Paige Garris, Fuller Garris, and Caleb Garris. Berle’s extended family lives throughout the southeast and held a special place in his life. Many thanks to his nephew Paul Stephan and his wife Francie who have been invaluable in the last few years in helping Berle and Anne any way they could. The family would like to thank our "friends as close as family," Ireatha Poole, Alvivian Pearson, and Sharon Hunter, who have so lovingly and sacrificially cared for Berle and Anne. By his request there will be cremation with interment at Bay Pines National Cemetery. A date for a celebration of life service will be forthcoming. Moss Feaster Funeral Home is handling all details. In lieu of flowers, memorials to Rotary International (myrotary.org) are recommended. Service at the funeral home home will be live streamed: http://webcast.funeralvue.com/ Event ID: 66510 No password required

Berle Garris Sr., 93, died Sunday, July 25 at Seasons Hospice in Dunedin, Fl. His beloved wife of 69 years Anne was by his side. Anne, an accomplished writer, and editor interviewed her husband for an article five years ago. The following are... View Obituary & Service Information

The family of Berle Garris Sr created this Life Tributes page to make it easy to share your memories.

Send flowers to the Garris family.