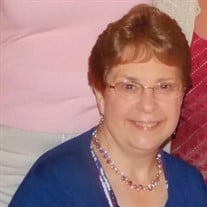 Bettie Marsha Weiler, 5/9/1954-4/13/2021 Daughter of Beatrice Sharp Weiler(originally of Tuckahoe, NJ-7th of 9 children William Emil Weiler from Egg Harbor, NJ 18th of 18 children), grew up in Tuckerton, NJ where her parents owned Weiler’s 5& 10 from 1950-1964. She graduated from Southern Regional High School in Manahawkin NJ and was privileged to be able to maintain several high school friendships throughout her life. She also graduated with honors with an AS in business from Ocean County College, BS-Richard Stockton University, New Jersey. Bettie and husband, Chuck Worthley attended high school together in many of the same ‘advanced classes’ but didn’t begin dating until 1983 since ‘nerds’ didn’t date back then!!! They have been together ever since and married in 1988. They had many cats over the years. Bettie and Chuck decided individually that having children was not going to happen – for Bettie it was because she was born with a club foot and didn’t want to pass it along, even before she understood anything about DNA. One of her mom’s brothers had a clubfoot and another died at 3 months of spina bifida. In 1986, when they bought their first home in Galloway, NJ, it came established with a cat. And so began the ‘saga of the cat family’ that, at one point grew to 8! In 1991, Bettie obtained her MBA from Monmouth University Extension program while working full-time. Bea joined them in 1995 in Absecon where they bought a house with her input when she could no longer live alone. The house was renovated to add a bathroom for her and enlarge her bedroom. Bettie and her mom enjoyed spending Many hours landscaping the back yard. Even in her 70’s and 80’s, Bea could work circles around her! Bettie worked at Spencer Gifts headquarters in the HR dept in Egg Harbor Township, for 5 years, then moved to Burdette Tomlin Memorial Hospital now Cape Regional in Cape May Court House, NJ in1985. In 2001 she became Director of HR for Atlantic Medical Imaging(AMI) in Galloway from which she retired in 2014 and Chuck and Bettie, reducing her commuting time from 40 minutes to 5 minutes. In 2014 we retired and moved to Dunedin, FL, expecting to live a long life together but God had other plans. She became ill in September 2020 and was diagnosed with glioblastoma, a very aggressive and incurable brain cancer. Chuck took wonderful care of her until her death at age 66, Bettie and Chuck were blessed with a relationship built on love, honesty, and mutual respect. We were 32 when we married in 1988 both with well-established careers, we decided that Bettie would maintain Weiler as her last name, (As Chuck’s mom expressed ‘don’t tell me she’s one of THOSE!’-Yes! A women’s libber! OH No!). Bettie was very active in researching her Ancestry and eventually developed Chuck’s family trees as well. Particularly fascinating to her was learning thru careful examination of German records, the real name of her paternal grandfather whose name appeared on the ship’s manifest in 1894 as Max Schnee. His last name was Schnee but he changed it to George Weiler. Nobody knows why. His real name was Frederick Paul Robert Schnee. They named 3 of their sons Frederick, Paul and Robert. He met his wife, Emma Koffinke, in Connecticut where she worked as a Nanny. She came from Germany also in 1892 or 1894. In addition to Chuck, Bettie is survived by more than 40 cousins with whom she was closest to Debbie Cormier and Jeanette Garber from the Villages and Martha Zintl and husband Frank, snowbirds(many of whom she’s never met,) Chuck’s brother, Garth and wife, Shawna from Prescott, AZ, and their Chuck’s cousins families – Nancy, Joyce and Linda. Best friends of more than 40 years from Egg Harbor and Egg Harbor Township, NJ, Teresa Littley and Carol Quinn and their families. Bettie also leaves behind many close and supportive friends in their community, Patrician Oaks, Dunedin FL. In lieu of flowers, Bettie asks that you donate to a local animal rescue organization or to your favorite Zoo. Bettie was thrilled at the supportive messages and cards from former co-workers and friends from previous workplaces.

The family of Bettie Marsha Weiler created this Life Tributes page to make it easy to share your memories.

Send flowers to the Weiler family.