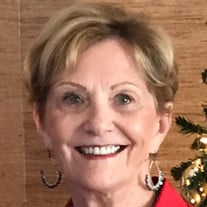 Bonnie McManus Ruggles, 77, of Clearwater, FL passed away peacefully on May 27, 2021. Bonnie was born in Chicago, Illinois on September 13, 1943 to Phillip and Arvada McManus and was raised in Whitefish Bay, Wisconsin. She earned her Bachelor of Science degree in Mathematics from the University of Michigan. She married Thomas Ruggles on June 11, 1966 and lived in Hawaii for 4 years while Tom served in the Army JAG Corps. They settled in Belleair, FL in 1975, residing 38 years and raising their two daughters. A driven business woman, Bonnie began her career in real estate in 1978. Her passion for the industry led her to open her own boutique real estate company, Beachcomber Real Estate, in 1981, which specialized in Belleair and beachfront properties. After nearly two decades of building her successful business, she sold it to Coldwell Banker in 1999. Bonnie was active in the community. She served as President of the Belleair Civic Association, and as a Town of Belleair Commissioner from 2001-2006. She served on the Executive Committee of the Morton Plant Foundation and on the Board of Directors for the Florida Association of Realtors. Lovingly known as "Bon Bon" once she became a grandma, she adored spending time with her grandchildren. She was always a fierce competitor and after retiring, especially enjoyed staying active playing golf, bridge, croquet and pickleball. "Bon Bon" is survived by her devoted husband Tom; her daughter Kim Shealy of Lexington, SC and husband Brent; her daughter Kelly Miller of Tampa and husband Jim; her sister Marilyn Osborn and her brother Kerry McManus of Cincinnati, OH; her brother Phillip McManus, Jr. of Edgewater, NJ; and her beloved grandchildren Thomas and Elizabeth Shealy and Abigail and Thomas Miller. A memorial service will be held on Thursday, June 3, 2021 at 11am at Peace Memorial Presbyterian Church, 110 S. Ft. Harrison Avenue, Clearwater. In lieu of flowers, donations may be made to the Michael J. Fox Foundation for Parkinson's Research at MichaelJFox.org.

Bonnie McManus Ruggles, 77, of Clearwater, FL passed away peacefully on May 27, 2021. Bonnie was born in Chicago, Illinois on September 13, 1943 to Phillip and Arvada McManus and was raised in Whitefish Bay, Wisconsin. She earned her Bachelor... View Obituary & Service Information

The family of Bonnie McManus Ruggles created this Life Tributes page to make it easy to share your memories.

Send flowers to the Ruggles family.