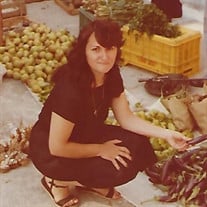 The family of Christine Marketos-Cuomo created this Life Tributes page to make it easy to share your memories.

During the morning hours on May 3rd, with incense burning in...