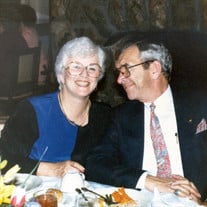 Cornelia Crawford Mudano, 87, of Largo, Florida, passed away on April 6, 2021 at the Sabal Palms Nursing Home. “Connie” came to Pinellas County as a young child, attending school in Safety Harbor in the 1940s, and graduating from Clearwater High School in 1951. After spending some years in New York City and south Florida, she moved to Belleair in 1966 with her husband Frank Mudano. Connie was very active in the community during the 70’s, working with the Junior League, the Windlasses, the Red Cross, and fundraising for St Paul’s Episcopal School where she would also teach classes on macrame and weaving techniques as a guest artist. In 1974, she joined what would be the first of many fights to preserve the integrity of the Belleview Biltmore Hotel; this one to prevent over-development of the site by US Homes. It was this fight that sparked what would become a lifelong interest in Historic Preservation. Working with a local historian, she helped create Volunteers in Preservation. VIP led to the creation of the Pinellas Historic Commission, and ultimately Heritage Village. During this time Connie also did the required research and documentation to put the Belleview Biltmore on the National Register of Historic Places. Historic Preservation led to the other great passion of her life – Public Access Television. She and a group of volunteers from the local historic preservation movement were the first production team trained by Vision Cable as part of their agreement to bring cable television into Pinellas County. The show they created – Pinellas Past – ran for over 200 episodes produced over ten years. When the cable company wanted to stop supporting Public Access, Connie led the fight to have Pinellas County continue offering this service to the community. A proposal to dissolve the Belleair Police Department in the mid-1980s led to Connie running for Town Commission. She served in office long enough to find herself the first female Mayor of the town in 1996. During this time she served on a number of local boards, and was a member of the planning committee for the Pinellas County Diamond Jubilee. Connie is survived by her brother, Douglas Lloyd Crawford of Largo, her two daughters: Lisa Mudano Dalton of Largo and Amy Alderman of Asheville NC, three stepchildren, nine grandchildren, five great grandchildren, and a large extended family that she loved and valued to the end of her days. A Celebration of Life will take place at Church of the Ascension on Saturday April 24th at 11 am. The family requests that in lieu of flowers, a donation be sent to Heritage Village.

Cornelia Crawford Mudano, 87, of Largo, Florida, passed away on April 6, 2021 at the Sabal Palms Nursing Home. &#8220;Connie&#8221; came to Pinellas County as a young child, attending school in Safety Harbor in the 1940s, and graduating from... View Obituary & Service Information

The family of Cornelia Crawford Mudano created this Life Tributes page to make it easy to share your memories.

Send flowers to the Mudano family.