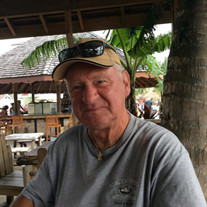 David W. Haupt Sr., 81, of Clearwater, Florida, passed away on September 6th, 2021, in Safety Harbor. He was born in Albany, New York on November 25th, 1939, to the late Raymond & Lillian (Larway) Haupt. In 1989, he met Onalova Farnam, and the two were married six years later in October of 1995. He and Onalova moved to Clearwater from New York in 2001. In his free time, David enjoyed golfing, fishing, and bowling. In his younger years, he was also a singer in the 5K Gold band. David was always laughing and was known to be a happy go lucky guy. David is survived by his loving wife of 25 years, Onalova Haupt of Clearwater, and sons David Haupt Jr., and Jonathan Haupt, stepson Lenny (Marie) Farnam, daughters Kim Diresta, Sheri Letizia, and Karen, and stepdaughters Heidi Farnam, and Onalova (Kevin) Shaw, as well as many nieces and nephews. He is also survived by step-grandchildren Miley and Tayler Farnam, and best friends Frank and Brenda Davis, Jim Mitchum, and former band member Dickey as well as many other friends.

The family of David W. Haupt Sr. created this Life Tributes page to make it easy to share your memories.

Send flowers to the Haupt family.