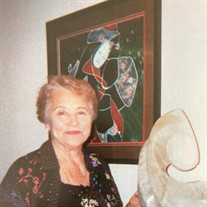 Dorothy Briccetti was a long-time resident of Honeymoon Island, Dunedin, Florida. Born on September 6, 1927 in Mt. Kisco, New York, she is survived by four children: Lee Ellen, Frederick, John and Anne, as well as a son-in-law, Chris, and daughters-in-law Rebecca and Loren. She has six remarkable grandchildren and a sister, Therese, along with many nieces and nephews with whom she was close throughout her long and creative lifetime. She lived the first half of her life in New York State as a dedicated wife, mother and teacher. But her passion was always in the realm of fine arts and art history, and she was recognized from an early age by her family and friends as a uniquely gifted visual artist. Dorothy could do anything with her hands— paint, renovate a house, create a huge marble sculpture (with power tools most people couldn’t even lift). As a young woman, Dorothy worked as a dress-maker and millinery designer at luxury department stores with their own couture lines, such as Henri Bendel; and she won a scholarship to the Fashion Institute of Technology. After college, she dedicated her early career to working as an innovative educator, while receiving two advanced degrees from Columbia Teachers College. Simultaneously, she was raising her children, making a gracious and elegant home and supporting her husband in his medical practice. During the second half of her life, in Florida, Dorothy was a professional artist, accomplished both as a sculptor and a painter. She was also a master craftsperson, making stained glass windows and lamps of exquisite beauty, taking commissions. She participated in the ArtGroup gallery for many years in Dunedin and taught private art classes, participating in numerous exhibitions. On December 9, 2008 a fire destroyed the ArtGroup gallery and Dorothy’s artistry was featured in the local press because her six foot wooden “Pieta” sculpture was rescued from the fire almost intact. Charred as it was, the piece, which she was able to partially restore, became a deeply spiritual symbol of life’s resiliency. Dorothy loved her family, politics, nature and animals. She continued to make creative work well into her 90s, always experimenting—from paintings of local butterflies to new forms of colorful geometric abstraction. Her favorite quote is from the English theologian Malcolm Muckridge, “You need two things to lead a successful, happy life: moral integrity and good luck.” She had both. She was married for 28 years to Dr. Frederick Briccetti (deceased, 1985). Her family remembers Dorothy as a person of great energy, intelligence and artistic gifts. She was a deeply loving person and a creative force in many people’s lives

Dorothy Briccetti was a long-time resident of Honeymoon Island, Dunedin, Florida. Born on September 6, 1927 in Mt. Kisco, New York, she is survived by four children: Lee Ellen, Frederick, John and Anne, as well as a son-in-law, Chris, and daughters-in-law... View Obituary & Service Information

The family of Dorothy Briccetti created this Life Tributes page to make it easy to share your memories.

Dorothy Briccetti was a long-time resident of Honeymoon Island,...

Send flowers to the Briccetti family.