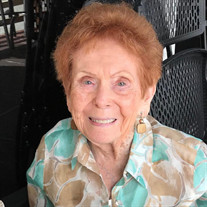 Dorothy Kobler was a strong woman. Although she never got a movie made about her, or a caped costume, or the ability to fly, the woman was a super hero. As a young woman, with a deaf mother and deaf younger sister, Dorothy became chief cook and bottle washer at the tender age of seven. Taking her hand-me-down violin, she would play on street corners for coins. You know, to help with rent and food and health care and… Graduating from Med-tech school, she became a phlebotomist, fulfilling her dream of working in the medical field by drawing blood from patients. But that dream was short lived as life had other plans. She married, had four beautiful girls, divorced, married again and had one son. They are still here. Sadly, Dorothy is not. She completed life’s journey on March 18, 2022, using up every ounce of energy that 96 year old body had to offer. Natural causes they say, but we suspect a super villain. Age couldn’t defeat a woman this strong. Speaking of super-strength, Dorothy worked for an ad agency in Minneapolis in the 60s, over-seeing a staff of 32. A woman of power in the Mad Men age, her unlimited might was still not massive enough to break the glass ceiling. It took two men to replace her. In the 70s, she and her husband Fred Kobler, along with her three youngest moved to Florida to start a new life and new career. But life wasn’t done throwing curveballs. The “Great Opportunity” that lured them to the Sunshine state quickly unraveled, leaving Dorothy’s crew at the mercy of life’s whims once again. With the rug pulled out from under them, they reinvented themselves again. And again. And yet again. We mentioned the superpower thing, right? They built a whole new life here in the South. Dorothy started her own catering company out of her kitchen. They got involved in the church at St. Paul’s. They found their way into a grand social circle, loving bridge club, Sundowners, and Murder Mystery parties. But here, now, at the end of her journey, she’s suffered losses as we all do. Losing her mother, sister, brother-in-law, Son-in-law, grandson, nephew, and so many many friends that 96 years gives and takes. And mostly, her beloved Fred over 25 years ago. Her kids moved away, all following the strength that had been lovingly embedded in their DNA. Five kids, all followed their own dreams and dispersed to the four corners of the country. Dorothy gave them all dreams, love, spirit and that damn superstrength to live large, stand tall, and the courage to be who we wanted to be. Dorothy was born on October 28, 1925 and died March 18, 2022. She’s remembered by her children, Candy, Sue, Kris, Kobbie, and Flip, her 9 Grandchildren and an ever growing squad of Great and Great-great grandchildren. Building that superhero dynasty. Services will be held at Cypress Palms of Largo, 400 Lake Ave NE, Largo, on April 9th at 2:15pm. In lieu of flowers, the family ask that donations, in Dorothy's memory, be sent to: Art Alamo 7013 Kestrel Lane Greensburg, PA 15601. Donations that are sent will be directed to Cypress Palms Assisted Living & Unitarian Universalists of Clearwater.

Dorothy Kobler was a strong woman. Although she never got a movie made about her, or a caped costume, or the ability to fly, the woman was a super hero. As a young woman, with a deaf mother and deaf younger sister, Dorothy became chief cook... View Obituary & Service Information

The family of Dorothy I. Kobler created this Life Tributes page to make it easy to share your memories.

Dorothy Kobler was a strong woman. Although she never got a movie...