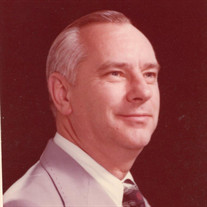 Roach, Douglas D. 93, passed away peacefully on April 24, 2021. Born in La Grange, Illinois he was a lifelong resident of Ozona and later Dunedin. He was preceded in death by his wife of 63 years, Mavis. He is survived by twin daughters and 3 grandchildren. He attended the University of Florida and graduated from Michigan State in Hotel Management. Doug had over 60 years’ experience in Florida land development and home building primarily in Pinellas County. He started his career in the 1950’s as the 3rd employee of Charles Rutenberg’s Imperial Homes, a company that was later the nucleus for US Home Corporation, Florida’s major Developer and Home Builder from the 1970’s through the 1980’s. By 1970, Doug had risen to Vice- President of Land Acquisition and Development before retiring as President of the Florida Land Division. He was the driving force behind the planning and implementation of the Countryside Development, Highland Lakes, and numerous other projects throughout Pinellas County. Doug was well known for his honesty and integrity and admired for his many accomplishments in the Real Estate Industry as acknowledged in the local newspapers upon his retirement from US Homes in 1978 at which time he was referred to as “Mr. Pinellas” for his many accomplishments. After departing the Corporate world, Doug started his own Real Estate Brokerage firm and joined a former coworker and engineer friend, Kenneth King, in establishing a number of companies engaged in the acquisition, development, and management of numerous properties in Pinellas, Hillsborough, and Citrus counties. Notable projects were Twin Branch Acres, Lake Chautauqua Estates, Prestige Office Park, Diamond Self Storage, Pinellas Crossroads Retail Center, and Tampa Bay Skating Academy. Doug and his wife Mavis traveled extensively in their retirement years. They had many interests which included a life long love of boating on local waterways. Doug was active in later years as a board member of Keswick Christian School and used his knowledge and experience in land development to help Keswick expand their vision for growth into the future. Doug will be greatly missed by family and many friends. A Memorial Service is being planned for June 26 at 3:00 p.m. at Mease Life in Dunedin.

Roach, Douglas D. 93, passed away peacefully on April 24, 2021. Born in La Grange, Illinois he was a lifelong resident of Ozona and later Dunedin. He was preceded in death by his wife of 63 years, Mavis. He is survived by twin daughters and... View Obituary & Service Information

The family of Douglas D. Roach created this Life Tributes page to make it easy to share your memories.

Send flowers to the Roach family.