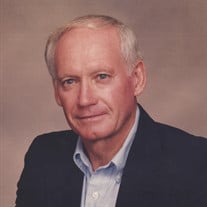 Elbert James (Jim) Collins peacefully went home to be with the Lord, Saturday May 1. Jim was preceded in death by his parents, Claude and Frances Collins and his brother and sister in law, George “Chip” Collins and Mary Jane Collins. He is survived by his children, Scott Collins (Holly) and Jodi Labban, 7 grandchildren: Justin (Alana), Austin, Ashley, Alyssa, Sydney, Alex and Riley, as well as 3 great grandchildren, Natalie, Emily and Avery. Jim was born at Fort Benning, GA on 5/11/37 and moved to Clearwater, FL to become a lifelong resident in April 1943. Jim attended Southward Elementary, Clearwater Jr High and Clearwater High School where he was a star athlete in football and baseball. Upon graduating from high school in 1956, he went on to play football at University of Tennessee. After returning home the next year due to injury, Jim enlisted in the US Army. After being stationed in Germany and travelling all through Europe, he received his honorable discharge in 1962 with a rank of Sergeant in the Army Security Agency with a Top Secret clearance. Upon his return home, Jim joined the Pinellas County Sheriff’s Office where he worked the remainder of his career. He retired in 1990 with the rank of Lieutenant. Jim enjoyed his retirement and played golf all through the central part of the state at every golf course he was able to get to. He loved golf! He also loved his kids and dedicated so much of his life to them, NEVER missing any of their activities. Once his grandchildren came along, his calendar once again filled up with events and activities to attend for them. Family meant everything to Jim and left an incredible legacy for his children, grandchildren and great grandchildren to follow. Heaven gained an amazing angel today and his family is blessed to know that it’s not good-bye but see you later. In lieu of flowers, please make donations to Suncoast Hospice in memory of Elbert Collins. For a live Webcast of the service please go to http://webcast.funeralvue.com and enter event id # 53338. No password required.

Elbert James (Jim) Collins peacefully went home to be with the Lord, Saturday May 1. Jim was preceded in death by his parents, Claude and Frances Collins and his brother and sister in law, George &#8220;Chip&#8221; Collins and Mary Jane Collins.... View Obituary & Service Information

The family of Elbert "Jim" Collins II created this Life Tributes page to make it easy to share your memories.

Elbert James (Jim) Collins peacefully went home to be with the...

Send flowers to the Collins family.