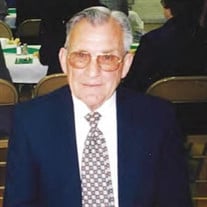 George A. Ness, 90, of Huntington, IN, passed away at St. Anne – Victory Noll Nursing Home, Huntington, IN, on Monday, March 29, 2021. Mr. Ness was born on October 5, 1930, in Huntington, IN, to George A. and Mary (Palmer) Ness. His parents preceded him in death. He married Phyllis Reust on January 23, 1954, at SS Peter & Paul Catholic Church, Huntington, IN. She preceded him in death on August 10, 2020. Mr. Ness was a 1948 graduate of Roanoke High School. George served in the United States Navy during the Korean War. He retired in 1984, after a career in real estate with Ness Bros. as a broker and auctioneer since 1965. He was also a seed broker and farmer auctioneer and performed one of his first auctions in this area in the 1950’s. He was a past member of the Kiwanis and a member of SS Peter & Paul Catholic Church, life member of VFW #2689 and American Legion in Roanoke, IN, and Florida. He is survived by two sons, Tim (Renee) Ness, Andrews, IN, Tom (Jackie) Ness, Columbia City, IN; two brothers, Carl (Sondra) Ness, Steve (Sherill) Ness, all of Huntington, IN; and one sister, Mary Ann Ness. He is also survived by four grandchildren, Andy Ness, Tyler Ness, Kaitlyn Ness, Courtney Ness; and one great grandchild, Kerrigan (Ness) Duncan. Along with his parents he was preceded in death by one daughter, Nancy Ness; and two brothers, Joe Ness and Palmer Ness. Recitation of the Rosary will be held on Tuesday, April 6, 2021, at 4:00 p.m. followed by the calling hours until 7:00 p.m. at McElhaney-Hart Funeral Home, 715 N. Jefferson Street, Huntington, IN. A Mass of Christian Burial will be held on Wednesday, April 7, 2021, at 10:00 a.m., at SS. Peter & Paul Catholic Church, 860 Cherry Street, Huntington, IN 46750, with Fr. Tony Steinacker presiding. In lieu of flowers memorials can be made to St. Vincent DePaul or VFW #2689 in care of McElhaney-Hart Funeral Home, 715 N. Jefferson Street, Huntington, IN, 46750. Burial will be in Calvary Cemetery, St. Petersburg, FL. McElhaney-Hart Funeral Home, 715 N. Jefferson St., Huntington, IN is in charge of arrangements. Online condolences: www.mcelhaneyhartfuneralhome.com

The family of George A Ness created this Life Tributes page to make it easy to share your memories.

Send flowers to the Ness family.