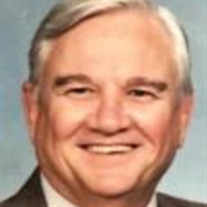 George Marion Pierce, Jr December 31, 1931 - February 25, 2021 Psalms 23 “My George”, as his wife Mary called him, was indeed truly loved by her. She preceded him in death on October 11, 2020. They were married and in love for nearly 69 years. George and Mary had a BIG life, a life that both of them agreed was blessed in a variety of wonderful ways. He loved his family with great fervor. Surely, they are all joyful to be together again in heaven! George (known as Marion until 1951) was born in Savannah, GA. He had some fun-filled childhood memories which included riding his bicycle and skate-wheel scooter from his home on Liberty Street to the park near Bolton Street. He enjoyed swimming and fun in Daffin Park, and the flying lessons from the top of a neighbor’s garage (I would’ve loved to have been a witness to this!). His most cherished memories of these times were visiting his grandparents, and his aunt’s and uncle’s farms in Screven County,GA, and working beside his Dad at the Service Bicycle Shop on Barnard Street, where he learned about bicycles and repairs. A move to Jacksonville, FL, precipitated many more fun activities such as biking, camping in the woods, hunting, golfing, fishing and row boating across Cedar Creek, St Augustine area and the St Johns River. Jacksonville is where he had his first paying job at New York Laundry when only 12 years old then advanced to the Florida Theater where he stayed until 17; he met so many good people and gained lots of free movie passes! George served in the Florida Air National Guard from age 17 to 19. He loved airplanes and did observation flights in a piper cub and C46. His favorite plane, however, was the P-38. At age 19, he joined the United States Marine Corps - and became a sergeant. His time in the Marine Corps was life changing for him. And he was always so proud to have served his country because he dearly loves America! After serving through 1954, George became a police officer for a brief stint, then became the Supervisor of the Tag Agency for the City of Jacksonville. He retired from the city in 1974 and it wasn’t long before he began his work with the State of Florida as a revenue officer which developed into becoming the people’s advocate. He totally enjoyed working for the state until final retirement in 1996. George loved the outdoors, which was evidenced by the activities he loved the most: extreme yard work (which meant his yard was a haven - sooo beautiful), golfing, boating, tennis, hunting, and swimming. He also thoroughly enjoyed music, listening and singing! He was a collector. George and Mary enjoyed a blessed life together. George had exceptional love for his mother, Ola - he called her the “greatest mom on this earth” and he was devoted to his siblings, Dorothy Anderson and Madlyn Howard. Together they shared many joyous moments with the Andersons, the Howards, the Joyners, the Nelsons,the Pierces and their dear friends. Mary and George considered themselves fortunate to have a loving daughter, Kathy Rossi and their son in law, they called son, Rob. Vacations were very special to them, as they took their Grandsons, Ray and George Woods, to places such as Fontana Dam, Deer Ridge, North Carolina and Callaway Gardens. They had grandchildren that they doted over, which in turn gave them great grandchildren to continue that doting on - and eventually great-great grandchildren of whom they were so proud. They had wanted a big family, and that goal was, indeed achieved - totalling in all, 31 Grandchildren!! George’s final resting place will be at Arlington National Cemetery, in Virginia USA. Mary and he will have a military ceremony at a time still to be determined. The family requests donations be made in George's memory to the Alzheimer's Association: https://act.alz.org/site/Donation2?df_id=32112&32112.donation=form1&utm_source=google&utm_medium=paidsearch&utm_campaign=google_giving&set.custom.wt=giving&gclid=CjwKCAiAhbeCBhBcEiwAkv2cYyBpDLqWqN0yvkQ05unBReaVRdyxY9c5mQzK4QWzOwRUbWx7qKmWOBoCNoUQAvD_BwE The service at Arlington National Cemetery is scheduled for 9:00AM, Tuesday, May 18, 2021. Please be at the Administration Building by 8:30AM, if you plan on attending. George is missed greatly. In George’s written words: “Thanks for the memories to all family and friends - I will see you in the morning….”

The family of George M. Pierce Jr created this Life Tributes page to make it easy to share your memories.

Send flowers to the Pierce family.