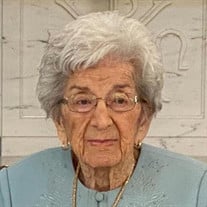 Helen B. Theofilis Humanitarian, philanthropist, and senior government administrator, Helen B. Theofilis, passed away at her home on Sunday, August 15, 2021. She was born Helen Tangalakis in Alma, Michigan on November 19, 1918 and grew up in St. Louis, Michigan, in a small farming community where her parents owned and operated a candy/food store called “Candy Land”. From parents of hard-working immigrants from Central Greece, Helen was raised with her three siblings to be good citizens, taught to work hard, become educated, and contribute to society. Upon finishing high school, Helen graduated from Central Michigan University in 1939 with a B.S. degree. Helen continued her formal studies at the University of Michigan studying Business Education. When finished, she taught for three years in Swartz Creek and St. Johns Michigan. She then left teaching for a position with the Federal Government in Detroit. In 1946, Helen continued her government work in Washington D.C., when she was selected as a member of a team for the Department of State to assist in the conduct and observance of the first free elections in Greece, following WWII. Upon her return to the States, she continued with the Department of Labor, Regional Office in Chicago. While there, she also became active with the Greek Women’s University Club, where she became its president and used the organization’s influence to raise funds to improve the bio-chemistry Department of the University of Athens, which was devastated during the war. She married Bill Theofilis in 1954 and they relocated in Detroit, Michigan. She continued her government employment with HUD, where she rose to the Assistant to the Director of the Department of Housing and Urban Development under George Ramney, Sr. She retired in 1965 and was honored as one of Detroit’s “ Top Ten Working Women”, as well as receiving congratulations from then President Johnson and Vice President Humphrey. Helen’s work achievements were shadowed by her endless philanthropic work. Throughout her life, she remained committed to helping others. Upon retirement, Helen and Bill moved to Athens, Greece for six years. While there Helen was appointed Welfare Chairmen of the American Women’s Organization of Greece, an organization which achieved innumerable philanthropic projects, most notably a project dedicated to helping the blind. Upon returning to the States and relocating to Clearwater, Florida in 1972, Helen continued her volunteerism by being a member of the Largo-Clearwater Charter Review Committee, Board Member of Island Estates Civic Association, and for fifteen years provided tax counseling for the local elderly community under the AARP volunteer program. Her zest for life was contagious. Helen is survived by her brother Stanley Tangalakis (Clearwater, Florida) and many nieces and nephews. Funeral services will be at Holy Trinity Greek Orthodox Church, Friday, August 20 at 11:00AM, located at 409 South Old Coachman Road, Clearwater, Florida, with Father James Paris officiating. Burial will follow in Sylvan Abbey cemetery. Visitation hours will be Friday, August 20, 10:00AM-11:00AM at church. Contributions in her memory may be made to Holy Trinity Greek Orthodox Church

Helen B. Theofilis Humanitarian, philanthropist, and senior government administrator, Helen B. Theofilis, passed away at her home on Sunday, August 15, 2021. She was born Helen Tangalakis in Alma, Michigan on November 19, 1918 and grew up in... View Obituary & Service Information

The family of Helen B. Theofilis created this Life Tributes page to make it easy to share your memories.

Send flowers to the Theofilis family.