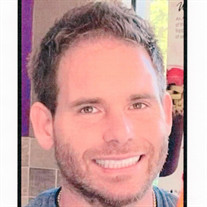 Known to family as “Jimmy” He was born May 9, 1988. James was a resident of Palm Harbor, Fl. James enjoyed taking his children to the Chapel Community Church in Tarpon Springs, Fl. James was born at Bon Secours Hospital in Grosse Point Michigan and started his journey on the East side of Detroit, Michigan first attending Detroit public schools, going to Jr. and Jr. High School years in Sterling Heights Michigan graduating from Stevenson High School. James liked to work for himself and started a roofing company in Michigan. After moving to Florida, James started a Cabinet Company and also a Home Maintenance Company. He prided himself on his slogan “JAMES CAN DO”. Growing up on the East side in Detroit, James liked to assemble and disassemble his siblings toys and bicycles. Both of his grandmothers used to get nervous but were amused as James would reassemble the bicycles while clenching his baby bottle with his teeth and still in diapers. Whenever he had the opportunity, James would always show his accomplishments with pride. During James Jr. High and High School years, he liked to play football and Sega. He was extremely proud as center, when he won the position of long Snapper. James also lived a short time with his Aunt Nancy and enjoyed his time with his cousin Nathan in Dallas. During this time James also practiced and was baptized Jehovah Witness. James also talked often of his fond memories of his time spent working with his uncle Pat and cousin Billy. Another of James fond memories was coming in 2nd place in the State of Michigan teenage Body Building competition. Whether it was working or going to the gym, he was easy to engage always being proud doing a little bragging of “JAMES CAN DO” and he wanted everyone to know that he meant it. James also liked to eat healthy. One of James favorite stops was the Escape Root Juice Bar, located at 769 Main Street in Dunedin. He liked to have a cereal bowl and ginger shot. Please if ever in the area, stop in and have one in memory of my son. He is such a loving beautiful soul, and who knows maybe the girls will share a story with you. Also, James did some of the work for Sunset Smoothies and the Ice cream at 2606 Bay Shore Blvd here in Dunedin and was planning on working there on Fridays. Stop by and look at some of his work. James loved and Palm Harbor and Dunedin Recovery community. This was the biggest Joy and some of the happiest times of his life. Whether jet skiing at the Honeymoon Island, going out to eat or fellowship with friends in the recovery community, James heart sang with Joy showing off Kiki and Wyatt to all of his friends. His children were his biggest pride. He loved them more than anything. James will be forever missed and loved by all. We love you Jimmy. Love your family FOREVER. James is preceded in death by his grandfathers, Weldon Dugan and Robert Carroll; grandmother, Peggy Dugan; Uncles, William Dugan and Daniel Dugan; aunt Heidi Carroll; cousin, Nathan Tonolini. James is survived by his son, Wyatt R Dugan; daughter, Lakinslee Dugan; grandmother, Helen Carroll, mother, Marcia Dugan; father, Robert Dugan; sister, Christy (Raymond) Ringle; brother, Robert (Fatima) Dugan Jr. ; sister, Nikki (Donald) Dugan; brother, Shane Dugan ; nieces and nephews Huayda, Avkhan, Evan, Aymen, Donald Jr., Ishmael, Troy, Cole, Olivia, Laney and son Maize. Also, uncles and aunts, Rob, Cindy, Pat , Nancy, Phil, Steve and Mel, Kathy &Gino, Jeff and Carolyn and Pat, Jim and Tom. In lieu of flowers, Memorial donations will be handled over to Robert Dugan Jr. and placed in a trust for James children. A livestream webcast of the service will be shown at 3:00 pm at http://webcast.funeralvue.com/ event id # 69302 no password required.

Known to family as &#8220;Jimmy&#8221; He was born May 9, 1988. James was a resident of Palm Harbor, Fl. James enjoyed taking his children to the Chapel Community Church in Tarpon Springs, Fl. James was born at Bon Secours Hospital in Grosse... View Obituary & Service Information

The family of James Joseph Dugan created this Life Tributes page to make it easy to share your memories.

Send flowers to the Dugan family.