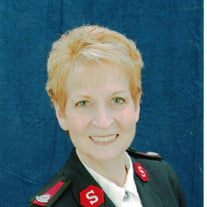 Janet Lee (Cox) Rowland was born on May 10, 1951 and was Promoted to Glory on February 23, 2021. She was born in Breese, Illinois to parents Rex (Dean) and Mary Cox. At the age of four, her father Dean Cox (Son of Commissioners Jay Clyde and Opal Cox) died suddenly in an automobile accident. Eventually, life took Mary and Janet to Michigan where Mary met Janet’s stepfather Ed Cairns. This caused the family to move to Port Huron, Michigan where her spiritual journey began to flourish as a Junior Soldier, Corps Cadet, Musician, and faithful YPL participant at the Port Huron Salvation Army. It was at The Salvation Army Port Huron Corps where she met the love of her life Douglas Rowland. Doug and Janet were married on February 13, 1971. Doug and Janet celebrated 50 Years of faithful marriage prior to her passing. In 1971 they entered The Salvation Army School for Officer Training as part of the “Blood & Fire” Session and were commissioned in 1973. They served as Corps Officers in Petoskey, MI, Mishawka, IN, Niles, MI, Cadillac, MI, Michigan City, IN, Omaha (Citadel), NE; Royal Oak, MI, Grand Rapids (Fulton Heights), MI; and Norridge (Citadel), IL. They also served as Wichita, KS City Commanders and in 2016 they retired from the Kansas and Western Missouri Divisional Headquarters where she was Older Adult Ministries Director and Community Care Ministries Secretary. In the summer of 2000, Janet attended the International College for Officers in London, England. Janet was known for her love of people, her kind heart, and encouragement to ALL through their spiritual journey. She led Bible Studies, Women’s Ministries, Small Groups, she was a faithful prayer warrior and encourager. Above all Janet had a special pride and love for her family. While raising her four children, she instilled strong faith in the household, demonstrated her support and commitment by never missing a school event or baseball game. Her grandchildren were her pride and joy. She spoiled each of one of them and used her spiritual gift of faith by praying for each one every day. Janet loved to travel, she enjoyed cruising, driving to see her family and going on weekly Friday outings that her and Doug enjoyed in retirement. She never allowed health issues to get in the way of enjoying her retirement. We know Janet is now dancing and rejoicing with her Savior! She will be greatly missed by her loving husband Doug, daughter Amy (John) Stewart, Brian (Carol) Rowland, Jeff (Stephanie) Rowland, Jeremy (Danielle) Rowland, and 9 grandchildren: Aubrey, Madelynn, Ava, Brooklyn, Reagan, Micah, Addison, Eli and Fallon. Family and friends will always remember her for her strong faith, beautiful smile, unconditional love, kindness, determination, encouragement, faithfulness, and laughter. Celebration of Life Service Saturday, March 13th at 11:00 am at The Salvation Army Clearwater Corps 1625 N. Belcher Rd. Clearwater, FL 33765 Live streamed at YouTube: https://youtu.be/2aI8B5tPL_0 Please send condolences to: Major Douglas Rowland (Husband) 2220 Swedish Dr. #22 Clearwater, FL 33763 [email protected] Amy Stewart (Daughter) [email protected] Brian Rowland (Son) [email protected] Jeff Rowland (Son) [email protected] Jeremy Rowland (Son) [email protected]

Janet Lee (Cox) Rowland was born on May 10, 1951 and was Promoted to Glory on February 23, 2021. She was born in Breese, Illinois to parents Rex (Dean) and Mary Cox. At the age of four, her father Dean Cox (Son of Commissioners Jay Clyde and... View Obituary & Service Information

The family of Janet Lee Rowland created this Life Tributes page to make it easy to share your memories.

Send flowers to the Rowland family.