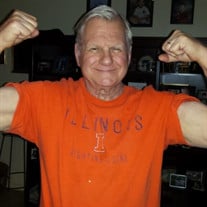 Jerold Joseph Sofran Sr., 82, of Dunedin, Florida passed away on December 10th, 2021, in Safety Harbor. He was born on January 22nd, 1939, in Freeport, IL to the late George and Leona (Zahorjanski) Sofran. He moved from Freeport to the Dunedin area is 1981. While in Freeport, Jerold worked for Honeywell and after he moved to Florida, he worked for Tepro of Florida before his retirement. During his younger years, he enjoyed hunting and fishing. He was also a devoted Chicago Bears fan. Jerold had a big heart and made friends wherever he went. He was a devoted husband, father, and grandfather. In addition to his parents, Jerold is predeceased by his brothers John Michael Sofran and George Peter Sofran. He is survived by his wife and best friend, Adrien Tae Sofran, who loved him dearly, as well as his sons Jerold Joseph Sofran Jr. and Timothy Allen Sofran, his daughter Deanna Marie Penick (Dennis), his sister Patricia Lee Schutte (Dale), his sisters-in-law Sabrina Hotz (Ron) and Sonia Bourgeois (Leo), mother-in-law Gladys Carpenter, and grandchildren Christopher Steele and Freyja Sofran, and great grandchild Caydence Steele. Jerold also had many loving nieces and nephews and friends who will miss him. A visitation will be held on Sunday, December 26th, at Moss Feaster Funeral Home in Clearwater, 693 S. Belcher Rd. Clearwater, FL 33764, from 2:00-3:00 PM with a funeral service to follow at 3:00 PM. A service will also be held at a later date in Freeport, Illinois. Please check back in the future for updated service information. The service will be live streamed and you may use the information below to view: http://webcast.funeralvue.com/ Event ID: 65219 No password required A second visitation will be held on Saturday, January 22nd, 2022, at Burke-Tubbs Funeral Home, 504 N. Walnut St. in Freeport, IL from 1:30-2:30PM with a memorial service to follow at 2:30.

Jerold Joseph Sofran Sr., 82, of Dunedin, Florida passed away on December 10th, 2021, in Safety Harbor. He was born on January 22nd, 1939, in Freeport, IL to the late George and Leona (Zahorjanski) Sofran. He moved from Freeport to the Dunedin... View Obituary & Service Information

The family of Jerold Joseph Sofran Sr. created this Life Tributes page to make it easy to share your memories.

Send flowers to the Sofran family.