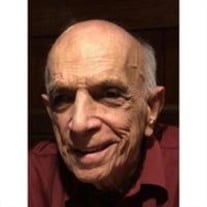 John M. Grasso, 94, of Dunedin, FL., and formerly of Trenton, NJ., passed away on Saturday, July 24, 2021, at the Suncoast Hospice Community Center, Palm Harbor, FL with his loving family by his side. Born in South Ozone Park, NY, he resided in Trenton, NJ, for forty-seven years before moving to Clearwater, FL, twelve years ago. A US Army veteran, John served two tours during World War II and served in the Korean War. He was first a ham operator, and then when they realized he could sing, an entertainer for the troops. He was the master of ceremonies and lined up the entertainment for the soldiers. He sang classical and opera with his band all over Europe during his time in the military. When he came back to the States, he finished his schooling at Columbia University. He went on to act off of Broadway and sang classical and opera in Manhattan. After meeting and marrying his wife Barbara, he went into the restaurant business and soon moved to New Jersey. He was a member of the VFW and raised money for the American Heart Association. John was also an advocate for the people of Trenton. He often brought ideas to City Hall to revitalize neighborhoods with empty buildings and started his neighborhood watch. He was predeceased by his beloved wife, Barbara Ann Shaw Grasso, his parents, Canio (Kaly) Grasso and Frances Turi Turi, his beloved sisters, Rose Fiore and Angelina Deviva, his brother, Nicholas Grasso, his beloved sons, Canio Robert Grasso and Michael David Grasso. He is survived by his loving daughter, Lisa Frances and her husband Renato Mannino, grandchildren, Giovanni, Fabiano, Alessia Mannino, Maria Luisa and her husband Joseph Staffieri, Eric and Mathew Grasso Marquart, (sons of Canio Robert Grasso), great grandchildren, Giuseppe, Giuliana, Sophia Staffieri, and Robin Canio Marquart, and several nieces, nephews, and great nieces and great nephews in the Virginia Beach Area. The funeral will be held on Tuesday, August 3, 2021, at 9:30 a.m., at the Brenna Funeral Home, Immordino Chapel, 1799 Klockner Road, Hamilton, NJ 08619. A Mass of Christian Burial will be celebrated on Tuesday, at 11:00 a.m., at St. Anthony’s Church, 626 South Olden Avenue, Hamilton, NJ 08610. Burial will follow at Our Lady of Lourdes Cemetery, Hamilton Township, NJ. Calling hours for family and friends will be held on Monday, August 2, 2021, from 6:00 p.m. to 9:00 p.m., at the Brenna Funeral Home, Immordino Chapel. To send condolences to the family, please visit www.brennafuneralhome.com.

John M. Grasso, 94, of Dunedin, FL., and formerly of Trenton, NJ., passed away on Saturday, July 24, 2021, at the Suncoast Hospice Community Center, Palm Harbor, FL with his loving family by his side. Born in South Ozone Park, NY, he resided... View Obituary & Service Information

The family of John Mark Grasso created this Life Tributes page to make it easy to share your memories.

Send flowers to the Grasso family.