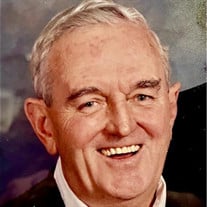 LEE, John Wallace (Wally) 89, resident of Dunedin, Florida, passed away peacefully on February 9, 2022. He was preceded in death by his loving wife, Ida Jacobson Lee, his parents Ethel and John Lee, his brothers Thurman, Roy, Chester and sister Jean Lee Thornton. He is survived by his sister Vera Lee Bagwell of Tuscaloosa Alabama along with his three children, Nicole Lee Bouchard (Ray), Jennifer Lee Andersen and Scott Wallace Lee. He is also survived by his five grandchildren. Wally was born on August 30, 1932, in Jena, Alabama. As a young man, when Wally wasn’t in school, he was either working the cotton fields, managing the produce department of the local grocery store, or maybe playing baseball. He graduated from Tuscaloosa County High School and then attended the University of Alabama (Roll Tide). After receiving an offer to work for an uncle in the hotel business, Wally left his beloved Alabama and began his lifetime career in the hospitality industry. He worked for hotels across the country and the Caribbean. Some of his favorite hotels include, The Grand Bahama Hotel, The Casa Blanca Inn, and The Grove Park Inn. Wally was contacted by the Jack Tar Hotel Group and offered the general manager position at The Fort Harrison Hotel. He enthusiastically accepted the job and moved to the Clearwater area. When the Fort Harrison was sold in the mid 1970s, Wallace was approached by the Hunter family to manage the Clearwater Beach Hotel. He was truly the perfect fit for the Clearwater Beach Hotel as he greeted his seasonal guests that he knew by name. He managed the property for 32 years until he retired when it was sold and ultimately became the Sand Pearl. Wally often reflected on the wonderful people he worked with and the special guests that he met at his hotels. When Wally wasn’t working, he enjoyed playing golf, traveling to see other resorts, but mostly he just enjoyed being with his love of his life Ida and his family and friends. In lieu of flowers, please make donations to The Arc Tampa Bay Foundation, https://thearctbfoundation.org/ or North Dunedin Baptist Church at www.myndbc.com

The family of John Wallace Lee created this Life Tributes page to make it easy to share your memories.