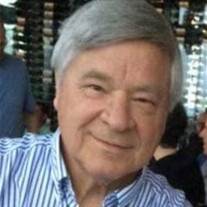 John P. McLay Sr. passed away on the 17th of February 2022 under Hospice Care. He was born on April 17th, 1940, and moved to Florida in August of 1964. He has been a resident of Pinellas County ever since. John loved his family greatly. He was always there to support and comfort not only them, but anyone who needed it. He loved to travel and spend time with all his family members. He will be forever missed. He is survived by his Wife, Teresa McLay, Sister Linda McLay Thomas, Sister Esther Sailors, Sister Martha Greer (deceased), Brother Glenn McLay and Family, Daughter Erin McLay Stover and family, Son John P. McLay Jr. and family, Stepsons John McGann and Family, Paul McGann and Famiy, Stepdaughter Laura Bickler and family. He has 11 grandchildren and 5 great grandchildren. John had a 33+ year career as a coach, educator, and High School Principal. He touched many lives and gave greatly to the betterment of schools and students throughout his career. In 1964, he began teaching and coaching at Northeast High School. He brought wrestling into Pinellas County Schools and was the Head Football Coach for nearly 15 years. In 1980 he became a dean at the “newly built” Countryside High School. Shortly after helping to open the school, he was promoted to Assistant Principal at Riviera Middle School and then Assistant Principal at Clearwater High School. He quickly stepped up and took his first principalship at Osceola High School in the mid 1980’s. From there, he became the principal at Dunedin High School and later finished his career as the principal of Dixie Hollins High School in 2000. He was known for being “hard, but fair” and a troubleshooter. He will be missed by those that worked beside him and taught under his leadership. A Funeral Service will be held at Calvary Baptist on Saturday, March 5th at 10:00 A.M. (110 McMullen Booth Rd. Clearwater, Florida). There will be a lunch reception immediately following the service. Expressions of sympathy in memory of Mr. John McLay Sr. are suggested to Suncoast Hospice. If you would prefer to send a floral arrangement, it must be received by 4:00PM on March 4th. WE LOVE YOU; WE MISS YOU; WE WILL SEE YOU AGAIN.

John P. McLay Sr. passed away on the 17th of February 2022 under Hospice Care. He was born on April 17th, 1940, and moved to Florida in August of 1964. He has been a resident of Pinellas County ever since. John loved his family greatly. He... View Obituary & Service Information

The family of John P. McLay Sr. created this Life Tributes page to make it easy to share your memories.

Send flowers to the McLay family.