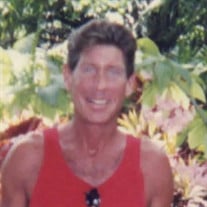 Jon C. Audibert, 69, of Seminole, FL passed away July 29, 2021, under Hospice care and surrounded by his children. Jon was born in St. Petersburg Florida on April 9, 1952, to Paul and Avis Audibert as the middle son of three children. Jon served with the USAF during the Vietnam conflict and upon his discharge, met the love of his life, Barbara, in Columbus, Mississippi. They married in 1974 and moved to Pinellas Park, Florida, where they raised two children, Kelli and Sean. They lived in Leesburg, Virginia for 10 years before moving back to Seminole, Florida. After the service, Jon followed his father into baking and worked for over 30 years as a bakery manager for large grocery stores. He then wished to take his love of gardening and landscaping into his work and started his own successful landscaping business, J&B Lawn Service. He retired after 10 years to spend more time with his family. Jon was a devoted father and husband and dedicated to his family. He was happiest spending time with his loved ones. He coached the kids’ baseball, softball, and other sports teams every season, and spent many hours at the pool or enjoying different adventures outside together. Jon had a great love of music and movies which he shared with his family, enjoying live concerts, and sci-fi and comic book movies, and tv shows. He is preceded in death by his beloved wife of 46 years, Barbara, and his father, Paul Audibert. Jon is survived by his mother, Avis Audibert; daughter, Kelli and her husband Matthew; son, Sean, and granddaughter, Sophia; 2 brothers, Larry, Bruce and his wife, Rose; and several nieces and nephews. Graveside service with Military honors will be on August 13 at 11 am at Bay Pines VA Cemetery.

Jon C. Audibert, 69, of Seminole, FL passed away July 29, 2021, under Hospice care and surrounded by his children. Jon was born in St. Petersburg Florida on April 9, 1952, to Paul and Avis Audibert as the middle son of three children. Jon served... View Obituary & Service Information

The family of Jon C. Audibert created this Life Tributes page to make it easy to share your memories.

Send flowers to the Audibert family.