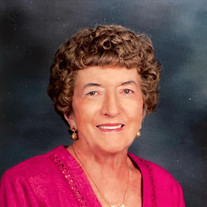 Lillian Elsie Gangelhoff Howard 5/17/29 – 3/1/22 “Be faithful unto death, and I will give you the crown of life.” Revelations 2:10 Lillian “Lil” Howard was born to Fred and Hilda Gangelhoff on May 17, 1929, in Hartford, Wisconsin, where she was baptized at Peace Lutheran Church and became a child of God. Shortly thereafter, her parents moved to Cass Lake, MN, where in 1939, her father Fred developed Stony Point Resort, which is owned today by the third generation of the Gangelhoff family. In 1942, Lil’s father purchased property in Clearwater, Florida, and in 1947, he opened “Gangelhoff’s Delux Motel,” Clearwater’s first mainland motel. The family then began their annual travels from Minnesota to Florida and would operate the resort in Minnesota in the summer and the motel in Florida during the winters. Lil was a 1947 graduate of Clearwater High School. When Lil’s father retired, Lil’s brothers Ron and Delbert purchased the motel from him. Her brother Ron passed his ownership along to Lil, enabling Delbert and her to share the responsibility of the operational duties. On November 2, 1952, Lil married Lamar Worth Howard. Lamar operated a television repair shop and eventually became a traveling sales representative for her brother Ron’s company, Chicago Cutlery. Lil and Lamar were blessed with four children; Stephen, Timothy, Rick and Yvonne, during their loving union of 28 years. Lamar passed away on January 30, 1981. Lil continued to persevere, never losing sight of her faith, which enabled her to put one foot in front of another. Throughout the difficulties, she remained a devoted mother and ardent business woman. She was determined, hand working, but also quiet and never quick to boast. Lil’s father helped establish First Lutheran Church, where she served and worshiped for her entire life. She taught Sunday School, was a member of the altar guild, the LWML, Stephen Ministry, and sang in the choir. She attended Friday morning Bible study where she developed many meaningful connections and made lifelong friends. In addition to Lil’s unwavering commitment to her faith, she had a passion for music and, most importantly, her family. She enjoyed nothing more than sharing a cup of coffee with a friend or family member. Hosting huge family gatherings in her home was something she cherished. Christmas included attending church on Christmas Eve, then going to the motel for “luschies” (cabbage rolls). Saturday mornings, you would always find Lil in the kitchen whipping up batch after batch of “egg pancakes” (crepes). Lil enjoyed nothing more than having her kitchen full of hungry family members waiting to see who could eat the most. She cherished these memories, and they sustained her during the tough times. Lil had an unwavering loyalty to her family. Throughout her years running the motel, she took every opportunity to share her faith, lift a spirit and offer a hug to those in need. In 1996, as part of her involvement in the Stephen Ministry, she was introduced to Kurt Hesebeck. They formed a special friendship that lasted for the remainder of her life. They were both committed to serving faithfully. They enjoyed trips to MN and Canada, going to events at Ruth Eckerd Hall, endless pie and coffee dates, and attending church together. Lil’s entire life was committed to her risen Savior and her family. She was preceded in death by her parents Fred and Hilda, her husband Lamar, her son Stephen, and brothers, Ron, Delbert, and Dave along with four other siblings that died in infancy. She is lovingly survived by her children, Timothy Howard, Fredrick (Malinda) Howard, and Yvonne (Joseph) Silcox, all of Clearwater, her daughter in law, Jacalyn Howard of Blackduck, MN, and by her devoted companion of more than 25 years, Kurt Hesebeck of Largo, FL. Lil’s children blessed her with 12 grandchildren and 16 great-grandchildren who will miss her dearly. She is further survived by her brother, Fred Gangelhoff of Ocala, FL, Sharon (Arvin) Gieseke of Cass Lake, MN, and numerous nieces and nephews as well as her sister-in-laws Doris Gangelhoff, Kay Gangelhoff and Lori Gangelhoff. In lieu of flowers, memorials may be directed to First Lutheran Church Clearwater, Capitol Improvement Fund, 1644 Nursery Rd., Clearwater, FL 33764 “You for Me and Me for You!”

The family of Lillian E. Howard created this Life Tributes page to make it easy to share your memories.

Send flowers to the Howard family.