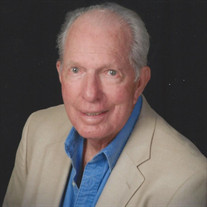 Lonnie Martin Meyers Jr., 89, of Palm Harbor, Florida passed away on November 5th, 2021, in Safety Harbor, Florida. He was born in Wallace Ridge, Louisiana on March 3rd, 1932, to the late Lonnie & Alma (La Croix) Meyers. Lonnie served in the United States Navy from 1952 until 1956. Afterwards, he graduated with a degree in aeronautical engineering and went on to work as an engineer for the space division of Lockheed Missiles & Space Company. Lonnie was one of the project managers who worked on the Apollo Project. He left engineering and bought a big truck and transported boats all around the country for the next 20 years. After that, he bought property in California and grew pistachio nuts for the rest of his working years. In addition to his parents, Lonnie is predeceased by sisters Muriel Warren and Juanita Richardson, and sister-in-law Joyce Meyers. Lonnie is survived by his loving wife, Darlene Meyers of Palm Harbor, FL, as well as his daughter Lori Zimmerman (Ron) of Marana, AZ; his son Jeff Meyers (Shay) of Toquerville, UT; stepdaughter Connie Van Nostrand (Brian) of Pinellas Park, FL; stepson Christopher Craig of St. Petersburg, FL; brothers Lester and Darrell Meyers, and grandchildren Alicia Sanchez, Justin Strohmeyer (Kelly), Ashley Strohmeyer, Jonathan Meyers, Matthew Meyers, Nicholas Meyers, and Hannah Meyers. He is also survived by great grandchildren Tony Ramirez, Ronan Strohmeyer, and step grandchildren Patrick Van Nostrand, Nicholas Van Nostrand, and Josh Mancino-Craig, and many nieces, nephews, and cousins. A graveside service with Military Honors will be held at Florinda National Cemetery on Friday, January 14th 2022, at 1:00 PM.

The family of Lonnie Martin Meyers Jr. created this Life Tributes page to make it easy to share your memories.

Send flowers to the Meyers family.