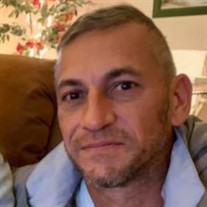 Lonnie Lee Wilson, 48, a resident of Clearwater, Florida, passed Saturday, December 4, 2021. He was a loving Father to his son, Makya Lukacs-Wilson. He was a Freelance Chef. Lonnie enjoyed sailing, playing pool, tennis and bowling. He was preceded... View Obituary & Service Information

The family of Lonnie Lee Wilson created this Life Tributes page to make it easy to share your memories.

Send flowers to the Wilson family.