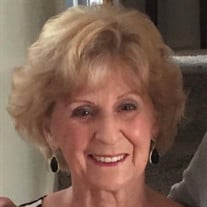 Margaret E. (McCabe) Riesener, 3/1/33 - 5/13/21, entered into eternal rest on May 13, 2021. She was preceded in death by her loving husband of 59 years, Donald and son, Gary. She is survived by her children, Cathy (Steve) Rosenkranz, Robert (Lydia) Riesener, grandson Ryan Rosenkranz, granddaughters Allison (Doug) Grantham and Sara Riesener (Sean), great-grandaughter Avery, sister Lorraine Bernard and many beloved nieces and nephews. Peggy was born, raised and married in New Jersey. A few short years after she and Don were married, with 2 toddlers and another baby on the way, they embarked on a move across the country to Portage, Michigan. They made a life and home in Michigan and raised Gary, Cathy And Rob there for the next 26 years. In 1988, they were happy to realize their retirement dream and move to sunny Florida. Peggy loved the sunshine state and enjoyed relaxing and spending more time with family, as well as some boating adventures with Don, Lorraine and Pete. Shortly after their move to New Port Richey came grandchildren Ryan and Allison. Peggy adored her grandchildren and was so happy to be a big part of their childhood. Peggy and Don made frequent trips back to Michigan as Rob and Lydia's family grew to include Sara. Her grandchildren were her pride and joy and she was frequently heard to be praising their every achievement. Peggy always kept track of her nieces and nephews as their families grew and was so happy to see family at reunions or visits to Florida. Family was everything to her! In her later years, Peggy greatly enjoyed her exercise group and the wonderful friends she had there. Peggy also developed quite a fondness for Cathy and Steve's dog, Lola and enjoyed walking, snuggling and even napping with her. A Funeral Mass of Christian Burial celebrating Peggy's life will be held at 12 noon on Friday June 4, 2021, at St. Brendan's Catholic Church, 245 Dory Passage, Clearwater Beach, FL 33767, followed immediately by a celebration of life / luncheon at Cathy and Steve's home.

The family of Margaret Elizabeth Riesener created this Life Tributes page to make it easy to share your memories.

Send flowers to the Riesener family.