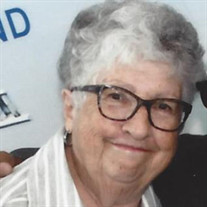 Martha Wentz Black, 78, of Clearwater, Florida, passed away Tuesday, April 20th, 2021 at 1:15 pm at Mease Countryside Hospital, Clearwater, FL. Born January 5, 1943, in Hanover, PA, she was preceded in death by her parents, the late Walter M. Wentz and Kathryn Kiracofe Wentz. Martha is survived by her companion of 25 years, Adolfo Carrion and his two children, son Willy and daughter Mahalia and her cousin Judy Horst. Martha is a 1960's graduate of Eichelberger High School in Hanover, PA, and four years later, she graduated from Lock Haven State College, earning a Bachelor of Science Degree in Education. She began her teaching journey of elementary students in the Morrisville Pennsylvania School District (Bucks County) and retired after 40 years of dedicated service. While Martha was teaching, she resided in Washington Crossing, PA. During those years, she developed an interest in the Westie dog breed and soon became an owner of several fine-breeding Westies. Her passion for the breed was evident by her association as a board member foundation and her participation as a frequent competitor in local and national competitions. In addition to her love of the Westie breed, she was an avid reader and a Junior League member. After retiring, she and her companion, Adolfo Carrion, moved to Clearwater, Florida. While there, Martha joined Adolfo in his love for baseball and soon became almost as astute as he quoted the names and statistics of the Tampa Bay Rays players. As avid fans, they traveled the country to watch their team practice and play. During retirement, Martha and Adolfo became world travelers, embarking on many cruise adventures, visiting local and national parks, and appreciating the beauty and nature of the land and sea. Together, they loved exploring new restaurants known for their fine foods and atmosphere and avidly pursued reading especially her weekly New York Times. Our hearts break with sadness and yet celebrate the freedom of release from the disease that took her life. Martha will be remembered and missed for her excellent planning skills, kindness, quiet spirit, and bonding relationships. The Moss Feaster Funeral Home in Clearwater, Florida is handling the service arrangements. A private committal service will be held on Tuesday, April 27th, 2021, with a viewing at 5:00 pm, followed by a service at 6:00 pm. Memorial contributions may be made to the Westie Health Foundation, 302 Hemlock Cove, Ball Ground, GA 30107, https://www.westiefoundation.org/donations.html.

The family of Martha J Black created this Life Tributes page to make it easy to share your memories.

Send flowers to the Black family.