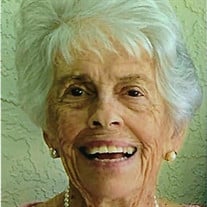 Mary C. McMahon, 95, of Clearwater, FL passed away Saturday, April 16, 2022 at home. Mary was born and raised in New Rochelle, New York, the daughter of John and Hazel Connolly. She had two sisters and a brother, Joan her older sister, passed away at age 14 months, Jack, and Evelyn. She graduated from Marymount College in Tarrytown, New York with a bachelors degree in economics. She was an officer for Union Dime Savings Bank in New York until she met her soul mate, Jack, in1954. Mary 'knew' upon meeting Jack, that her deceased grandfather had 'found her Irishman' for her! Mary& Jack were married in 1956. They lived for three years in Norwalk, Connecticut and proudly welcomed their son Jack, in 1957. Mary and Jack moved from Connecticut to Massachusetts and then to Maryland as Jack’s career progressed. Elizabeth, their daughter, was born in Maryland in 1960. In 1966, the McMahon family relocated to beautiful Clearwater, when Jack received an offer to start a Tampa branch for Mary’s father’s chemical company. In 1973 Jack and Mary founded Majemac Enterprises Inc. Working initially from their home office, Mary and Jack together built the company & developed a reputation for high ethics and success by serving the customer. When Mary and Jack’s son graduated from college, he joined Majemac where he apprenticed under his dad until Jack decided to hand over leadership of the company to him. After Mary’s dear Jack died in 2015, son, Jack took over the helm of Majemac and has continued the companies mission in their name. Mary was well known for her strong Catholic faith and her love for Jesus which was central to her life. She had a devotion to her family, and a cheery demeanor which brightened everyone’s day. She and Jack loved to travel, taking the opportunity to often mix business and pleasure at many beautiful locations. They enjoyed taking several cruises around the world and together creating cherished memories over their 59 years of marriage! They were both devoted to their family who grew to include three loving and caring granddaughters, Caroline, Clare and Mary Therese and cherished their two great grandsons, Bryson and Brayden. From fun family and friend gatherings to countless hours in their backyard pool, the McMahon residence was always a haven of fun and family. A hidden talent that Mary shared with family and friends was her talent to play wonderful Irish ballads on her baby grand piano all by ear! Her favorite song…when Irish eyes are smiling, the whole world smiles with you! After her beloved Jack passed in 2015, she continued to live a robust life with family, her many friends and her cherished dog Tina! She is survived by her sister Evelyn, her sister in-law, Jane, Elizabeth and her husband Michael, Jack and Amy, Caroline, Clare, Mary Therese, and especially Tina. We love her and miss her already but we rejoice that she is now with Jesus in heaven with all of her family and friends. May her soul and the souls of all the faithful departed rest in peace.

Mary C. McMahon, 95, of Clearwater, FL passed away Saturday, April 16, 2022 at home. Mary was born and raised in New Rochelle, New York, the daughter of John and Hazel Connolly. She had two sisters and a brother, Joan her older sister,... View Obituary & Service Information

The family of Mary C. McMahon created this Life Tributes page to make it easy to share your memories.

Send flowers to the McMahon family.