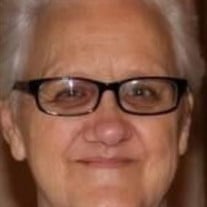 Mary Louise Parker, 75, of Holiday, Florida passed away on September 2nd, 2021, in Safety Harbor, Florida. She was born on June 15th, 1946, in Gardiner, Maine to the late James William & Nellie Mae (McLaughlin) Slocomb. In her free time, Mary loved playing games on her computer, and watching tv, especially her cooking and games shows. In addition to her parents, Mary is predeceased by her husband Mac McKuhen, brothers Frank Slocomb, William Slocomb, and Clarence Slocomb, her sister Joann Slocomb, and her sister-in-Law Martha Slocomb. Mary is survived by her three children, Cheryl Newman (Gavin) of Holiday FL, Dennis Parker (Amy) of Orlando FL, and James Parker of Dallas Texas. She is also survived by her 7 grandchildren, 5 great-grandchildren, two sisters Patricia Nickerson (Bob) of Florida and Elsie Slocomb of Alabama, and sister-in-law Nancy Slocomb of Alabama, two brothers David Slocomb (Theresa) of Maine, and Stephen Slocomb (Phonzy) of Indiana, as well as tons of nieces and nephews. At Mary’s request, there will be no public visitation or funeral service. She will laid to rest on the Slocomb family plot in Maine.

The family of Mary Louise Parker created this Life Tributes page to make it easy to share your memories.

Mary Louise Parker, 75, of Holiday, Florida passed away on September...

Send flowers to the Parker family.