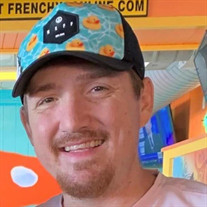 Michael Edward Helms Jr., 36, of Independence, MO passed away April 15, 2021 in his Clearwater, FL home. Michael was born September 24, 1984 in Kansas City, MO. Michael was an avid sports fan. He grew up playing hockey, baseball, and soccer, eventually earning a college scholarship for his soccer skills. As a long-time Chiefs season-ticket holder, you could find him at Arrowhead most Sundays or calling one of his many friends to discuss whatever sporting event was on that day. Michael was able to attend Super Bowl LIV with his mom and watch his favorite team win the Lombardi. He was a devoted son, brother, fiancé, and uncle, but mostly, he was the greatest friend. Michael had a huge heart and genuinely always wanted to know how people were doing. He maintained the same core group of friends for most of his life, his loyalty displayed by the many times he was a groomsman or honorary uncle. He and his fiancé, Kenzie, moved to Florida two years ago for a fresh start by the water. They were amid planning their wedding and making their plans for the future. Michael loved music, leaving behind a legacy of being a bassist in local bands with friends and the legendary local concert, Helmsfest. Michael had a way with words, always willing to have a deep and honest conversation. Michael was kind, loving, and had an infectious laugh. Michael was preceded in death by maternal grandparents, Larry and Mary VanderVeen; paternal grandparents, Donald and Betty Helms; as well as his best friend, PJ Oxenfeldt. Survivors include parents, Mike and Kathy Helms; sister, Kimberly (Benjamin) Duvall; fiancé, Kenzie O’Hare; future in-laws, Jon and Susan Waddell, Chloe, Matisse, and Mclaine Waddell, and Chase Vickerman; nephews, Chandler Duvall and Mars Vickerman; and many other aunts, uncles, cousins, and friends that may as well be family. Celebration of life will be held Saturday, May 1, 2021 at 5:00pm at his childhood home. In lieu of flowers, the family requests cards and memories of Michael’s life and friendships, with any memorial contributions going to the following link: https://gofund.me/dc213699

The family of Michael E Helms Jr created this Life Tributes page to make it easy to share your memories.