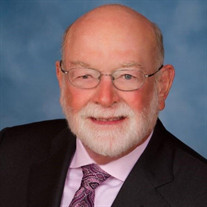 Michael Hall Kline, Sr. 82 of Belleair died very suddenly on November 17th 2021 surrounded by his family, clergy, and close friends. It was his 82nd birthday and the day had been filled doing all the things he loved the most. He was born in Washington D.C. to Evelyn Henckle Kline and Dr. E. Hall Kline, being raised as a “cradle” Episcopalian. As a child living near the Hudson River, his love for the water, boating, and fishing became a lifelong passion. Dr. Kline died when Michael was 11 years old. The family relocated to Morristown, New Jersey a few years later when his mother married W. Franklyn Hurlburt, Jr. who became Mike’s father and role model for the next 53 years. He graduated from Morristown Preparatory School and later graduated from Virginia Commonwealth University with a degree in Business Administration. Joan Osias was 15 and he 17 when they first met. For years, he always said “I pursued her until I caught her and she finally said “Yes!” They were married in Richmond, Va. on March 24th 1962. Together they had two children, Christina and Michael Jr. Mike began his career in the Insurance Industry initially working for Chubb and Son in New York City as a Marine Underwriter, being transferred to San Francisco and eventually to the Tampa office. Because of his love for the water and all it afforded, and knowing he would be transferred again, he chose to leave Chubb and remain in this area. He in time resumed that career and advanced into Executive Management retiring as a Vice President for The Episcopal Church Pension Group. Upon his retirement, he served the Episcopal Diocese of Southwest Florida and Bishop Dabney Smith as a risk management advisor, touring churches across the diocese conducting safety inspections, and educating local leaders about property and casualty insurance. Tina and Michael’s accomplishments were a great source of pride to him. First and foremost, he loved his family. He was Papa to his four grandchildren and was a constant in their lives. He was very fond of his three nephews and one niece always saying, “He and Joan didn’t have just two children, but six.” Michael has been described by his friends as kind, unassuming, larger than life, and a real “man’s man.” His robust laugh was legendary. Never one to boast, his generosity extended not only to his family, his community, and to the wider Episcopal Church. It was done quietly and always from his heart. He firmly believed being a good Christian and neighbor meant giving back to your community. He served his community in a myriad of ways. He loved the YMCA saying he had grown up a “Y Brat.” He had been a Board Member of the Suncoast YMCA for 30 years and was a past Chairman of that Board. During those years of service, he chaired the Finance, Endowment, and Executive Committees. He was also the recipient of the highest award the YMCA can bestow; “The Order of the Red Triangle” and a Rotary Paul Harris recipient. He is a past Board Member of St. Paul’s School in Clearwater. He was the former Chairman of the Board of Project Grace, a nonprofit organization providing medical professionals and the public with education and resources about end-of-life healthcare decision making. He served three separate terms on Diocesan Council (Board of Directors) for the Episcopal Diocese of Southwest Florida. He is a former Board Chairman of Dayspring, the Episcopal Camp and Conference Center for the Diocese and was currently serving as the Chairman of the Bishops Cabinet steering a twenty-million-dollar Campaign Fund. He and Joan have attended the Episcopal Church of the Ascension in Clearwater for 49 years. He served two terms on the Vestry, once in the position as Senior Warden. He loved his Lord God and tried to serve Him in his own quiet way. His memberships included The Pelican Golf Club, REAP, a Men’s weekly Bible Study, and the Belleair Country Club. He served on BCC Board of Directors. He was presently the Chair of the Croquet Committee. He enjoyed teaching clinics and mentoring players. He became a National Doubles Croquet Champion in 2016. Michael was dedicated and proud to serve the mission of The Hurlburt Foundation in his role as President. He was a longtime supporter of Morton Plant Foundation, The Florida Orchestra, Ruth Eckerd Hall, and The Lighthouse of Pinellas which serves the visually impaired. His commitment to the Lighthouse was because he had been blinded in his right eye at the age of 14. Michael was predeceased by his parents, Dr. E. Hall Kline, Evelyn Kline Hurlburt, W.F. Hurlburt, Jr, and sister, Margot Kline Lindner. He is survived by his wife, Joan, Belleair; son, Michael Jr, Tallahassee; daughter, Tina Colletti (Michael) Richmond, Va; grandchildren, Andrew Michael Colletti of Los Angeles, Matthew Scott Colletti of Washington DC, Sarah Christina Colletti, Richmond, Va; Andrella Kline Witkowski (Brett) Great Grandson, Henrik Towns Witkowski of Odessa; stepmother Jean Hurlburt, Venice; brother, W. Franklyn Hurlburt III, Sarasota; sister Nancy L. Hurlburt, Kill Devil Hills, NC. A Celebration of Life service will be at The Episcopal Church of the Ascension, Clearwater on Saturday December 18th at 11:00 am. In Lieu of flowers donations may be made to The Episcopal Church of the Ascension Youth Programs.

Michael Hall Kline, Sr. 82 of Belleair died very suddenly on November 17th 2021 surrounded by his family, clergy, and close friends. It was his 82nd birthday and the day had been filled doing all the things he loved the most. He was born in... View Obituary & Service Information

The family of Michael H. Kline Sr. created this Life Tributes page to make it easy to share your memories.