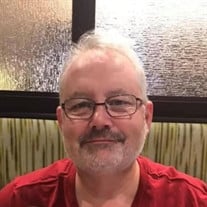 Michael Alan Nyhart, 58, of Clearwater, FL passed away August 24, 2021 from complications of COVID-19. Michael was born September 26, 1962 in Harrisburg, PA. He was preceded in death by parents, Robert M. Nyhart, Mary Grant Slick; sister, Marsha; and brothers Robert and James. Michael retired from the Commonwealth of Pennsylvania and was working at BJ’s Wholesale Club as a Deli Supervisor. He always put others before himself and enjoyed the simple pleasures of life. Michael was a fan of Elvis, old westerns, history, antiques, classic cars, grilling, Christmastime, Philadelphia Eagles, and the Phillies. His great sense of humor and selflessness accompanied his notable legacy. He is survived by his soulmate/wife Vicki; daughters, Emily, Jamie, Nikita, and Erika; son, Jose; grandchildren, Luke, Derrick, Bella, and Apollo with whom he shared a special bond; sister in law, Sherry; brother in law, Steve; brother, Donald; and sister, Kathy. Michael was a great provider who was devoted to his wife, children, and grandchildren. He was adored, loved, and cherished by everyone who knew him.

The family of Michael A. Nyhart created this Life Tributes page to make it easy to share your memories.

Send flowers to the Nyhart family.