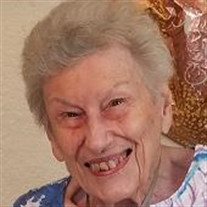 Mildred "Arlene" Constantino, 96, of Clearwater, FL passed away Sunday, April 3, 2022. Arlene was born August 3, 1925 in Jersey City, NJ to William F. and Amy A. (McCormick) Hartmann, who have preceded her in death. Arlene graduated from Pompton Lakes High School (New Jersey) in 1943 and later from Sherwood Secretarial School in Paterson, NJ. She went on to work as a secretary for New York Telephone Co until she married Joseph. The couple were married in Passaic, NJ in April 1955, and settled on Cortlandt St in Belleville, NJ. Arlene and Joe raised their children and spent their entire 54 years of marriage in that same Cortlandt St home until Joe passed away in 2009. They both always enjoyed bowling, but more socially than competitively. There were many fun family camping trips and Arlene made the best of every situation. They loved to take long motor trips, touring and visiting extended family & friends all across the country. As she reached her 90’s, Arlene moved to stay, first temporarily and then permanently, with daughter Amy in Clearwater, FL. She was glad to get away from the New Jersey winters and was really happy to have Amy close by to help her out. In Florida, she loved doing word puzzles, and playing board and card games with her family every day, along with having her ice cream. Unfortunately, as she got older Arlene wasn’t able to travel, but she loved hearing from family and friends, or just getting updates about how everyone was doing. She was always a very caring person. She will be lovingly remembered by her 3 children Stephen Constantino with wife Sherie, Bruce Constantino, and Amy Summers with husband John; and by her 5 grandchildren, T.J. Constantino with wife Christina, Jason Summers, Christian Constantino with fiancée Tiffany, Nathan Summers with wife Svetla and Julie Summers, as well as 2 great-grandchildren, Ella Constantino and Kai Summers.

Mildred "Arlene" Constantino, 96, of Clearwater, FL passed away Sunday, April 3, 2022. Arlene was born August 3, 1925 in Jersey City, NJ to William F. and Amy A. (McCormick) Hartmann, who have preceded her in death. Arlene graduated from Pompton... View Obituary & Service Information

The family of Mildred "Arlene" Constantino created this Life Tributes page to make it easy to share your memories.

Send flowers to the Constantino family.