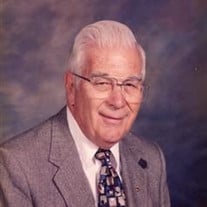 Heaven gained a very special person last week. With family members present, Paul M. Blackburn Jr. passed away peacefully on November 27 in Dunedin Florida at the wonderful age of 95. Paul was a World War II Navy veteran, and a graduate of Ohio State University with a degree in Electrical Engineering. After graduation, Paul worked for two firms before starting his own consulting business, Metzger & Blackburn. Paul served on the Building Commission of Central Ohio for over 30 years, including a tenure as Chairman. He was also very active in the community, as an engaged member of Messiah Lutheran Church in Reynoldsburg Ohio, Sertoma International, and the Masonic Order. Paul was a passionate supporter of Alcoholics Anonymous, serving as a member for 52 years, and selflessly dedicating his spare time helping people lead sober lives (in lieu of flowers, donations to Alcoholics Anonymous are requested, and may be done via the organization’s website). Paul is survived by his sister, Carol Shaw and his children, Paul F. Blackburn (Ursula), Amanda L. Lee, Sandra Edwards (David), David Blackburn, Raymond Blackburn (Jill), Eric Blackburn (Gail), six grandchildren, and four great-grandchildren. He will be greatly missed. Services will be held at Moss Feaster in Dunedin, 1320 Main Street on Wednesday December 1, 2021. The viewing will be held at 2:00pm with the service starting at 3:00pm. A live webcast can be viewed at http://webcast.funeralvue.com/ enter ID # 64458, no password required.

The family of Paul M. Blackburn Jr. created this Life Tributes page to make it easy to share your memories.

Send flowers to the Blackburn family.