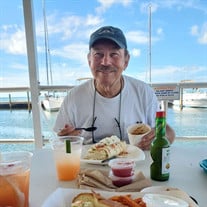 Rainer Georg Blomberg, 73, of Palm Harbor, Florida, passed Thursday, October 28, 2021 in Marathon, Florida. Rainer's journey began when he landed in New York from Berlin Germany at the age of six.His mom told him to say goodbye to his playmates. He thought he was coming to a big island. A really big one!!! His struggles and challenges in life started then as he could speak no English. He followed and listened to the children. He mastered the English language beautifully. One day while we were dating, he heard such weird noises coming from the windows. "Oh, he said that's just thermal expansion coming". I knew this intelligent man would keep me thinking and growing intellectually!! He graduated in 1966 from North East High School.He loved playing his clarinet in the Scarlett Band. His guitar gave him many fun times as he strummed on it just like his dad. The tennis team was fun for him and he was also in the Foreign Exchange Club. The University of Florida was his college choice. He attended the School of Engineering and received his degree in 1972. Rainer was well respected. He retired in 2015 as a Mechanical Engineer from Honeywell after 43 years of dedicated service. Honeywell awarded him 3 gold medals for a few of his outstanding accomplishments. He was awarded 2 patents. One in August 2011 for "Electrical Component Thermal Management". In 2014 he received one for "Printed Board Assembly Interface Structures". He worked on the world's first Motionless Inertia Guidance System as well. His work on the space station hand controls made him smile each time he saw them on TV.He was very proud of his accomplishments at Honeywell. Rainer's brilliant but stubborn mind never stopped thinking, planning and calculating his next move or project. When he was 14, he and his dad built a sailboat together. He became an avid sailor from that day forward. He was a very confident and skilled sailor. We did couples races together. He was like a monkey, all over the boat. I did the rudder and a line. He did all the rest and the sails. We even won a race together! He sailed and crewd on many boats. His sail to Havana, Cuba was his favorite. He was president of the SPSA (St.Petersburg Sailing Association) for a few years. I was blessed to meet some of his wonderful comrades he sailed with. They are all excellent sailors. Porsches were his favorite vehicle to drive. He was a POA Club member for many years. We did a few activities together and boy, is that car fast! I will always cherish our memories in his Silver Porsche. He and I loved the water. We snorkeled for snails for 4 aquariums and we dove for lobsters at Big Pine Key Resort in the Keys. Twice a year, we went and spent 3 weeks each time there. He became a better "bug" catcher than me. This was one of our favorites past times together.Every anniversary, we cruised to a different Western Caribbean location and dove each time. He was alive and happy diving the Bahamas, Labadee Haiti, Honduras, St. Martin, St. Joe, Antiqua and at most ports. Such great memories and experiences, we created together. Rainer loved me so much that he took extra lessons and learned how to swing dance with me. It was a challenging activity for him. He became an A+ dancer with me. We danced on the weekends with Fritz and Eva. He even quit smoking cigarettes to keep up the activities we were involved with. I was blessed with 20 happy and fulfilling years with Rainer. He could fix almost anything around our home. He had a vast amount of knowledge in him. He knew a little about everything. My Rainer is very sadly missed so so very much. I am sure that he is reflecting on all of the fun we had together through out these wonderful years together. He was preceded in death by his parents, George and Christina Blomberg and his sister Marina Blomberg. Rainer is survived by his beloved wife of 18 years, Joni Blomberg; son, Derek (Mary) Blomberg and very talented granddaughter Annalise Blomberg. Memorial contributions are greatly appreciated in Rainer Blomberg's memory to The Florida Keys National Marine Sanctuary Foundation in his name. https:\\secure.givelively.org\\donate//national-marine-sanctuary-foundation//florida-keys-national-marine-sanctuary-foundation or call 305-809-4700 or 305 852-7717. To view the memorial service for Rainer Blomberg, PLEASE SEE BELOW: http://webcast.funeralvue.com Memorial ID: 63313 Password: (Leave Blank) Event Date: Nov 12th, 2021 Event Time: 6:00 pm est Location: Moss Feaster Dunedin

Rainer Georg Blomberg, 73, of Palm Harbor, Florida, passed Thursday, October 28, 2021 in Marathon, Florida. Rainer's journey began when he landed in New York from Berlin Germany at the age of six.His mom told him to say goodbye to his playmates.... View Obituary & Service Information

The family of Rainer Georg Blomberg created this Life Tributes page to make it easy to share your memories.

Send flowers to the Blomberg family.