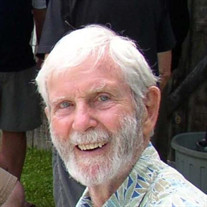 RICHARD A. CLOSSON Richard Arthur Closson died peacefully on March 8, 2022 in Dunedin, Florida. He was 90 years old. Born in Troy, New York to Hanford Hillman and Marion Miller Closson (nee Benedict) in 1931, he studied history at the University of Rochester and theology at the Boston University School of Theology. He was ordained in the Methodist church in 1955. Richard loved people and was curious, accepting, and open toward everyone he met. His kind and gentle spirit, his reverence for life, and his sense of humor became apparent the moment you shook his hand or looked into his eyes. He also loved the natural world, especially the mountains and lakes of the Adirondacks and coastal New England. A loving father and former Boy Scout, he taught his children to build good campfires, identify birds and trees, and to sweep campsites with brooms made of pine boughs, leaving them cleaner than they found them. He canoed the lakes of the Adirondacks, in the Old Town canoe he had restored, as well as the rivers and lakes of Maryland, West Virginia, Maine, and Florida. He also enjoyed camping his way across the country on car trips. Bringing the natural world indoors, he loved working with wood—pine and birch especially—and he made cutting boards, spoons, boxes, bookcases, picture frames, liturgical furnishings, and candelabras, as well as games and toys for the delight of his grandchildren. He was known in the family for his long goodbyes and for his generous benedictory words at the end of visits. His love for music—singing especially—came out in many areas of his life: traditional songs around the campfire, old love songs in the car on cross-country trips, hymns in church. As a young man, he sang with the Seminary Singers at Boston University and also in a barbershop quartet. He could sing along with the radio using do-re-me syllables to pitch. Richard pastored United Methodist churches in Arcade, Newfane, Clarence, and Niagara Falls, NY. He baptized a lot of babies, married a lot of couples, visited the sick, delivered a lot of sermons, and counseled a lot of people in their times of need. He left the ministry in 1977, turning his love for woodworking into a vocation. In Idaho Springs, CO, he opened a wood shop. Moving to Keedysville, MD in 1988, he established a woodworking business called Woodhue. He kept one foot in the ministry, serving fourteen years as part-time pastor for Braddock Heights Lutheran Church. His most recent job was as crossing guard on the corner of Douglas and Union in Dunedin. The son of a Methodist minister, Richard was active in the church from the time he was a young man. His spiritual journey was influenced by a host of liberal thinkers and theologians, from Kahlil Gibran to Claude Raines to Bishop John Shelby Spong. Ecumenical at heart, Richard was an active member of Salem United Methodist Church in Keedysville and First Presbyterian Church of Dunedin, where he was involved in volunteer work with the homeless. With his wife, Laurie, he also belonged to B’Nai Israel Temple of Clearwater. He was active as a volunteer in many other organizations, including Kiwanis Club of Western NY; Burning Bush of Baltimore, where he worked with prison inmates; Ruritan in Keedysville, a civic organization; and Temple B’Nai Abraham in Hagerstown, where he taught arts and crafts at the annual retreat. Richard was preceded in death by his brother, David E. Closson, and by his ex-wife, Shirley Stahlbrodt Closson. He is survived by his wife, Laurie Closson, and by four children and their spouses: Martha Vaccarella (and John Waite) of Lewisburg, PA; Paula Closson Buck (and Jim) of Lewisburg, PA; Richard Closson (and Bonnie) of Whitefish, MT; and Gayla Hopkins (and Brooke) of Butler, PA; as well as by a stepdaughter, Adrienne D’Olimpio (and Doug) of Lyndon Center, VT. He will also be greatly missed by his sixteen grandchildren and twenty-two great-grandchildren. A Celebration of Life service will be held Friday, March 25 at First Presbyterian Church of Dunedin at 11:00 a.m.at 455 Scotland St, Dunedin, FL. 34698. If you would like to make a donation in Richard’s honor, please give to the Alzheimer’s Association. Please schedule any flower orders to be delivered to the church prior to service, at 455 Scotland St., Dunedin FL., 34698, 727 733-2318

The family of Richard A. Closson created this Life Tributes page to make it easy to share your memories.