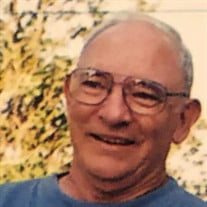 Robert E. Kime 88, of Crystal Beach, Florida passed away peacefully Thursday March 31, 2022 in Dunedin, Florida after a brief illness. He is survived by his wife of 65 years, Colleen McLaughlin Kime; his daughter Robin (Tom) Peacock; his granddaughters Sarah Peacock and Charlotte (Zach) Gardner; brother Lawrence Kime; and many nieces and nephews. He was preceded in death by his parents, sister Charlotte Kime Baldauf, and brother David Dean Kime. Bob was born September 6, 1933 to the late Bryan and Ruby Manahan Kime in Shelby, Ohio. The family moved to a farm in Huron County, Ohio where he attended Ripley Township School and Greenwich High School. He attended barber school in Toledo, Ohio and served in the U.S. Army as a radio operator in Germany in the 1950s. He worked as a barber in Shelby before opening Kime's Barber Shop in Greenwich in the late 1950s. He later moved his barber business to Willard, Ohio where he also sold real estate and operated a car wash business. After moving to Florida in the 1970s, he bought Bob's Barber Shop in Dunedin where he would barber for over 40 years. He also sold real estate in the Dunedin-Clearwater area. Bob had a life-long interest in cars, motorcycles, and planes. He learned to fly single-engine airplanes as well as glider planes. He was an avid fan of stock-car and open-wheel auto-racing. He enjoyed driving cars and motorcycles. Sunday drives, cross-country vacations out west, trips to Ohio with the grandchildren; the open road called to him. He and Colleen enjoyed motorcycle riding on the highways and country roads of Ohio and Florida. Until the age of 80, he rode his Harley Davidson Centennial Edition Sportster to work at the barbershop. Bob never met a stranger. He could start up a conversation with anyone and find something in common with them in a few minutes. He loved to tell stories and share a good laugh. Memorial Services: Andrews Memorial Chapel 1899 San Mateo Drive Dunedin FL 34698 Tuesday May 3, 2022 at 3:00 pm and Eastman Funeral Home 49 West Main Street Greenwich, OH 44837 Date and time to be announced Cemetery: Edwards Grove Cemetery Greenwich, Ohio In lieu of flowers or gifts, please contribute to a worthwhile charity of your choice. *****

The family of Robert E Kime created this Life Tributes page to make it easy to share your memories.

Send flowers to the Kime family.