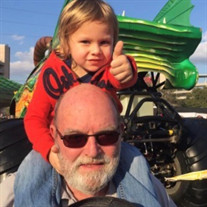 Ronald “Pappy” Lamar Smith, 72, of Treasure Island, Florida peacefully passed away on January 5, 2022, while in the care of hospice and Sabal Palms in Largo, Florida. Ronald was born in Shreveport, Louisiana on June 10, 1949, to Marshall Lamar and Billie Jeane (Bernard) Smith. He was a native of Louisiana where he spent nearly his entire life. Ronald graduated from Northwestern University in Natchitoches, Louisiana with a Master’s Degree of Environmental Science. Ronald retired as a Biologist for the Louisiana Department of Environmental Quality. In retirement, Ronald shared his love for food, vast knowledge, and witty humor with all those who knew him. In Spring of 2021, Ronald moved to Florida to be with family. Ronald was known to “check-in” daily with his closest friends and family, for which he will be dearly missed. Ronald is preceded in death by his father, Marshall Lamar Smith and brother-in-law, Jerry Mann. He is survived by his loving mother, Billie Jeane of Bossier City, LA; son and daughter-in-law, Ryan and Vanessa O’Connell Smith of Treasure Island, FL; son and daughter-in-law, Aaron and Jennifer Smith of Bossier City, LA; grandchildren, Sylar, Lincoln, Lexi, Braxton, Aiden, Alexander, Andrew, Adam; sister, Frances (Smith) Mann of Benton, LA; and many more extended family members. There will be a Celebration of Life scheduled at a later date.

The family of Ronald Lamar Smith created this Life Tributes page to make it easy to share your memories.

Send flowers to the Smith family.