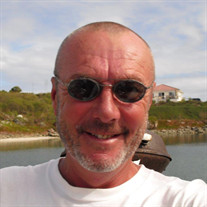 Stephen Kresl, 71, of New Port Richey, FL passed away Thursday, January 27, 2022 at Mease Countryside Hospital, Safety Harbor, FL. Steve was born February 21, 1950 in Naperville, IL to Gustave and Doris (Sprague) Kresl, who have predeceased him. Steve loved traveling, fishing, and his grandchildren. Despite growing up primarily in the midwest he developed a love of the water that would last a lifetime. Steve was an avid surfer in his youth, once driving a beat up VW van with friends from Illinois to Mexico in search of waves. This evolved into a passion for sailing that culminated in a largely solo trip from his home in Massachusetts to the Dominican Republic, followed by years living on his boat (Gypsea) in Luperon, DR. Later in life these travels extended onto land, traveling up and down the east coast in his RV to visit family and friends. He is survived by Tim Kresl (Son), Ashley Kresl (Daughter in Law), Harper Kresl (Granddaughter), and Maxwell Kresl (Grandson). Steve was a man of few words, but often expressed his love for his son, daughter-in-law, and grandchildren to everyone he had the pleasure of meeting. He will be deeply missed by family and friends, although he will certainly live on forever in our memories, actions, and stories.

The family of Stephen Kresl created this Life Tributes page to make it easy to share your memories.

Send flowers to the Kresl family.