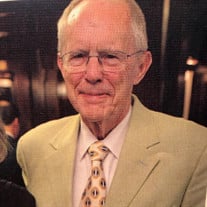 Thomas P. Latimer passed away on May 14, 2021, at age 97 after a brief illness. He was being cared for most recently at Morton Plant Rehabilitation Center (Madonna Ptak) in Clearwater, Florida. He is survived by his wife Jacqueline Shaner Latimer; and daughters Carol Brabbee (Rick); Margaret Wolfe; and grandchildren Andrew Brabbee (Minette); Kristen Bieler (Charles); Katherine Wolfehagen (Paul); Allison Spence (Chris Scot); Alex Brabbee; Laura Wolfe; and nine great-grandchildren. His devoted nieces Shelley Wolfe; Katherine Von Klaudie (Stephan); Melody Ellis (Marc); nephew Ronald Pollock; and sister-in-law Ronda Pollock also survive him. Tom was born in Wilmington, Delaware, on April 9, 1924, to Thomas H. Latimer and Natalie Peabody Latimer. His father was an engineer who worked for various paper companies and the family moved often. The Latimers spent summers on the Maine Coast, experiences that instilled in Tom a lifelong love of the water. He especially enjoyed introducing his children, grandchildren, and great grandchildren to these pleasures when they visited his homes near the water. Tom graduated from Worcester Academy in Massachusetts where he excelled academically as well as athletically in track and field. He subsequently enrolled at Cornell University where he pursued a degree in engineering but his enlistment in the Army in 1943 during WWII interrupted his education. He served in active combat as a forward observer attached to artillery in Germany and France, one of the most dangerous posts which forced him close to enemy lines. He received five bronze stars for his service. His wartime experience was transformative in many ways, forging his character as well as cementing his view that war should always be a last resort. An avid reader of history— particularly military history—Tom was a lifelong student of armed conflict and politics. After the war Tom returned to Cornell to complete his education and—like many young men of that generation who survived—he eagerly embraced the carefree life of a college student, while attending to his studies as well. He graduated with a B.S in Engineering in 1949. After graduation Tom moved to Olean, New York, to take a job with Clark Brothers, a supplier of gas and oil equipment. It was in Olean where he met Jacqueline, a young widow with two daughters, Carol and Peggy. They married in 1958. One of Tom’s favorite activities during those years was competitive sailboat racing on nearby Cuba Lake, as a member of the Cuba Lake Yacht Club. Tom often recruited Carol and Peggy as crew. Tom advanced in his career at Clark Brothers eventually becoming Group Vice President of Dresser Industries, which had been incorporated into the company. In 1970, he was recruited by Chicago Pneumatic Tool Company in New York City and became CEO. He and Jackie enjoyed living in New York as well as the international travel his position required. They made many friends throughout the world on these trips. After Tom retired in 1986, he and Jackie divided their time between homes in Bellport, New York, and Clearwater Beach, Florida, where they took great pleasure sharing these homes with family and friends. In Bellport, Tom particularly enjoyed the camaraderie and lively discussions of current events at the weekly “Saturday Morning Breakfast Boys” group that met at the village marina. In retirement, Tom was honored to serve for many years on the Board of the Logistics Management Institute (LMI), a nonprofit consulting organization to the government. He was a member of the Union League Club of New York and the Carlouel Yacht Club in Clearwater Beach, Florida. The family wishes to thank the staff of Madonna Ptak for their excellent and compassionate care in these last months. Arrangements are being made by Moss Feaster Funeral Home in Clearwater, Florida, and Guenther Funeral Home in Portville, New York. A private service for the family will be held at a later date. Tom will be remembered for his generosity to his extended family and the communities where he lived. Contributions in Tom’s name may be made to the Salvation Army or The Nature Conservancy.

Thomas P. Latimer passed away on May 14, 2021, at age 97 after a brief illness. He was being cared for most recently at Morton Plant Rehabilitation Center (Madonna Ptak) in Clearwater, Florida. He is survived by his wife Jacqueline Shaner Latimer;... View Obituary & Service Information

The family of Thomas P. Latimer created this Life Tributes page to make it easy to share your memories.

Send flowers to the Latimer family.