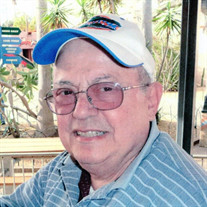 Vincent Rocco DeMarco of Clearwater Florida, formerly of Cape Elizabeth, Maine, passed away peacefully on March 1, 2021 at the age of 86. Vin was born in New York City, the son of immigrants Ignazio and Gioacchna DeMarco. He was the fifth of eight children. He worked his way through school at NYC’s Stuyvesant High School and City College of New York, where he earned a degree in engineering. Vin earned his master's degree in electrical engineering at the Massachusetts Institute of Technology, where he worked in MIT’s Instrumentation Lab (today the Draper Labs) to develop computerized guidance systems that were used for air, submarine and space navigation, including NASA’s Apollo program. Vin and his family eventually settled in Washington, DC, where he led federal programs to develop affordable mass transit systems, to reduce pollution from bus emissions and to enable accessibility in public transit for people with disabilities. In 1994, Vin retired to Cape Elizabeth, Maine, where he joined the Coast Guard Auxiliary and helped found Knights of Columbus Council #11747 at Saint Maximilian Kolbe parish, where he was also a member of the adult choir. Despite his myriad contributions to engineering, his family was always the most important part of Vin’s life, and his time spent with his children and grandchildren was his most precious activity. He will be most remembered for his Italian cooking, his joy of singing, his leadership as Scout Master, baseball coach, husband, father, mentor, and as Gramps. Vin is predeceased by his first wife Patricia Bradley DeMarco in 2005 and granddaughter Theresa Ortman. He is survived by his wife of eleven years Doris DeMarco, his brother Salvatore (Joanie) DeMarco, his sister-in-law Mary Bradley of South Portland, Maine, his children Edward (Garland) DeMarco of Bethesda, Maryland, Mary Catherine (Michael) Ortman of Ellicott City, Maryland, Vincent (Kathy) DeMarco of New Canaan, Connecticut, Francis DeMarco of Marietta, Georgia, John (Kristie) DeMarco of Windham, Maine, and James (Julie) DeMarco of New Providence, New Jersey, as well as twenty-five grandchildren and ten great-grandchildren. A family memorial service will be held in Maine later this year. In honor of Vin’s legacy, please consider a donation to the Arthritis Foundation.

Vincent Rocco DeMarco of Clearwater Florida, formerly of Cape Elizabeth, Maine, passed away peacefully on March 1, 2021 at the age of 86. Vin was born in New York City, the son of immigrants Ignazio and Gioacchna DeMarco. He was the fifth of... View Obituary & Service Information

The family of Vincent Rocco DeMarco created this Life Tributes page to make it easy to share your memories.

Send flowers to the DeMarco family.