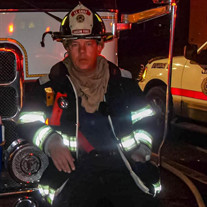 Dale Eckensberger Sr. escaped this crazy time due to Covid winning on August 15, 2021. He fought and fought as you all know how stubborn he was. Dale was born on October 9, 1963 in Woodbridge, NJ. He loved his parents. Other parents wish they had a son like him that was so devoted. After graduation or as he called it his release, he joined the Iselin #11 Volunteer Fire Department and volunteered his way to Chief and held a commissioner’s position. He loved the fire department and volunteered for 30+ years. He is a life member. He decided running from burning houses was safer at his age than running into them, so he moved to Florida to enjoy his love of golf, boating and pool rooms. He had 2 children; Dale Jr and Randy that he tolerated, I mean cherished. He would call them every day, sometimes 100 (hmm, ok maybe 100 is exaggerating but 10 is probably not). He would call to just say hello or that he was pulling into a gas station to get gas or to let us know what our weather would be in Jersey. He was a very devoted father and when you spoke to him about his kids, he would light up. He could be in the middle of a story (that you probably heard a million times) and you would say one of the boys name and BAM, he lit up and then start to talk about the boys. We asked his friends to send pictures and WOW! What a life he was living…Uh, far from what we thought. We pictured him hanging with old people, sitting in a chair watching television with his devoted dog and buddy, Gunner, just getting old! Nope, we see him swinging on tire swings, surrounded by beautiful woman, costumes, and living life. AND many people knocking on the door to offer their condolences, like teary eyed sincere condolences. Dale, was a force of nature, he was right (and nothing was going to change that). He worked hard for many years being a good provider to his family. His most recent job, was doing security at a resort (more ladies!). His family meant more to him than anything else in the world. He was always proud of his crazy, challenging, funny boys Dale Jr and Randy. Again, you would never know he left New Jersey as he knew all the latest information. Probably from all the calls, hmm, now he will have those super powers of still watching all of us and knowing the scoop. Don’t worry, he is preoccupied with finding his mom and catching up with her. If he told you he will haunt you, I’m pretty sure he will. Hopefully he meant it in a funny way, if not good luck with that! Dale was also passionate about boating and could often be found in the ocean, maybe not always on the water, but the boat literally in the air over the water, or playing golf and pool with all his friends. We thought he played golf and pool with old farts because he lived in a retirement community but according to pictures (to our surprise) he was surrounded with all age ranges (not too young) because he had a life in the retirement community and outside of it. He had a lot of friends in Florida and New Jersey, apparently, he was the life of the party. He had a rememberable impact on everyone's life. Anyone who knew Dale knew that he was the most loving father a family could ask for. Dale was predeceased by his mom, Marilyn Eckensberger who died in 2018 and his dad, Russell who died in 2020. He is survived by his children Dale Jr and Randy. His Brothers, Bruce, Randy, Gary, and Scott. He has a god daughter Jill and many other nieces and nephews. The family requests in lieu of flowers to donate to https://www.firehero.org/about-us/ Services will be held on August 19, 2021 at Moss Feaster Funeral Home, 693 S. Belcher Rd. Clearwater, FL 33764 with a viewing from 4:00-6:00 pm and service to follow at 6:00 PM. The service will be live streamed and you may use the information below to view: http://webcast.funeralvue.com/ Event ID: 58739 No password required

Dale Eckensberger Sr. escaped this crazy time due to Covid winning on August 15, 2021. He fought and fought as you all know how stubborn he was. Dale was born on October 9, 1963 in Woodbridge, NJ. He loved his parents. Other parents wish they... View Obituary & Service Information

The family of Dale J Eckensberger Sr. created this Life Tributes page to make it easy to share your memories.

Send flowers to the Eckensberger family.