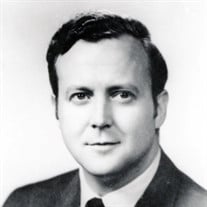 Forever In Our Hearts Niantic - David I. Thomas, 89, formerly of Niantic, Connecticut, passed away peacefully in Tampa, Florida, on July 24, 2021 with the love and comfort of his family by his side. Born in New London, CT on December 23rd, 1931, he was the youngest of three children and son of the late Irving and Lila (Douglass) Thomas. David was predeceased by his older sisters Elaine (Thomas) Reynolds in 2004 and Natalie (Thomas) Shelburn in 2013. David graduated from Bulkeley Boys High School in New London, CT in 1949. In 1951 he enlisted in the U.S. Army, where he was deployed to South Korea and later Japan. He served as a cryptographic supervisor (G-2), processing highly sensitive intel relative to combat special operations, and holding a top secret clearance and above, as he always stated! He honorably served until 1954 reaching the rank of Staff Sergeant where he completed his duties in the special security office of Army intelligence at The Pentagon. Upon returning to civilian life he enrolled at Gordon College in Wenham, MA where he studied Psychology (B.A. 1958). He served as the student body treasurer his junior year and president senior year. He was also president of the rifle club, and captain of the baseball team his junior and senior years, finishing his college career with a .394 average. In 1959 he took a job as a pastor at the Congregational Church of Salem, CT where he preached, until 1961. He then studied and graduated with a master’s in divinity and theology from the Hartford Seminary School in 1969. While also pastoring The Road Church of Stonington, CT from 1965-1969. He took a break from full time pastoral ministry and started his own window and custom remodeling business. T.W. David & Co. was created after working with his brother-in-law and learning the trade. This business ran successfully from 1978-1994, running primarily with a crew of four full-time employees with David being one of the four. He always worked alongside his crew and encouraged his guys to speak up if there was a better, more efficient way to get the job done. From 1971 to 1990 David was commissioned as a Chaplain in the U.S. Navy Reserves, followed by the Connecticut Army National Guard. He retired as a Lieutenant Colonel, having received numerous meritorious achievement medals and a Presidential Unit Citation. In 1993, then former Connecticut Governor, Lowell Weicker appointed David to the position of The Property and Procurement Officer for the Connecticut State Military Department where he worked until 2000. His final full-time job was at the First Baptist Church of North Stonington, CT where he preached from 2000-2015. Hard to believe in all these various endeavors that at the ripe age of 51 he still hadn’t met his partner for life. He would meet the love of his life Diane (Palladino) Thomas at an Army hospital at Fort Drum, NY. It wasn’t soon after he began dating Diane that he would say “you may not know this, but I’m going to marry you someday!” On March 26th, 1983 he was a bachelor no more, marrying Diane at the Coast Guard Academy Chapel in New London, CT. Everyone knew David to quote scripture off the top of his head, but he was so well versed and read in many topics and could hold court just about anywhere amongst anyone. For a baseball player he couldn’t stand to watch it on TV, but rather enjoyed watching the Patriots until both he and Tom Brady moved south to Tampa. He loved many things in life; including God, country, and most of all his family. Left to honor and cherish his memory, are his beloved wife Diane Thomas and twin sister-in-law Donna Flood. His son Brian and wife, Alyssa Thomas of Washington, D.C., Justin Thomas and Brandi Green of Groton, CT, and Scott and wife, Maki Brooker of Tampa, FL, as well as daughter Lynn and husband Nick Marocola of Staten Island, NY. David was blessed with 10 grandchildren, Brady, Julian, Aiden, Jamilah, Journy, Samantha, Maxine, Sebastian, Dylan, and Haley who lovingly knew him as Grampy or Poppy. David also leaves many special nieces and nephews, many of whom were like children to their Uncle Dave or David I. All will miss him very much, each with their own special memories of time spent with him. In lieu of flowers, memorial donations can be made to American Heart Association, (americanheart.org) or American Stroke Association (strokeassociation.org). Calling hours for friends and family will be held Thursday, August 26th, 2021 from 5:00-8:00 pm at Scamardella Funeral Home located at 332 Broadway, Staten Island, New York 10310. The phone number is (718) 981-6622. Burial services will take place Friday August 27th at 11:00 am at St. Peter's Cemetery located at 896 Clove Road, Staten Island, New York 10301.

Forever In Our Hearts Niantic - David I. Thomas, 89, formerly of Niantic, Connecticut, passed away peacefully in Tampa, Florida, on July 24, 2021 with the love and comfort of his family by his side. Born in New London, CT on December 23rd,... View Obituary & Service Information

The family of David Irving Thomas created this Life Tributes page to make it easy to share your memories.

Forever In Our Hearts