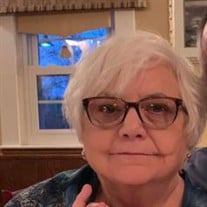 LAKEY, Donna Lynn Chirafisi, 73, of Dunedin, FL passed away Tuesday, January 18, 2021, surrounded by her loving children. She was born June 16, 1948, in Tuscaloosa, Alabama, to Donald Chirafisi and Madelyn Johnson Chirafisi. In her early years she traveled extensively, the daughter of an Army and Navy officer, she lived in many countries when she was young.  Later, she settled her family in Dunedin, Florida where she was a beloved Mother, Grandmother, Sister, Daughter and Friend.  Donna was above all a “Mom” to everyone.  Her single mission in life was to take care of others; a task in which she took very personally.  As a single Mom for most of her children’s lives she wore many hats.  From protector to teacher and from chauffeur to chef; every task she took on was done with everything she had while keeping her children in the forefront.  Tasks that continued with her grandchildren as well.  She spent her career working in accounting for banks and surgical supply companies. She retired to her second job, her most favored one, the job of “Grandma in Chief” helping to raise her 7 grandchildren. She enjoyed arranging flowers, crocheting, making Christmas ornaments for many, and sewed all her granddaughters’ Halloween and theater costumes.  She lived her life for her children and grandchildren; from team mom for baseball teams to Girl Scout mom, to backstage theater Grandma, she was always on the go.  Nothing was too much for her to handle; all while instilling a great work ethic in each of her children. She taught us that “it is OK to do what you want to do until it is time to do what you are supposed to do.”  Donna had many friends and enjoyed luncheons and Bingo. Donna is survived by her son Christopher Lakey (Martha); her daughter Carol-Lynn Lakey Roman (Mark); daughter in law Ellen Micua Lakey (Donald); grandchildren Shelby and Faith Lakey, Steven, Trevor (Devin), Grace and Anna Roman, and Braedon Lakey; sisters Dee Chirafisi (Jim Theye) and Lynn “Dory” Chirafisi Dilivio; second mom Doris Chirafisi; stepsisters, Charrie Bates (Scott), Beth Taylor (Ron) and Neen McGinnis (James); and so many others that called her “Mom.”  A private family memorial service will be held in the Spring where her ashes will be spread at her very favorite place, Sanibel Island.

The family of Donna Chirafisi Lakey created this Life Tributes page to make it easy to share your memories.