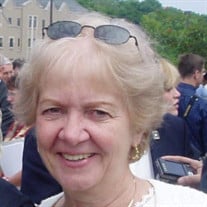 Elizabeth (Beth) Joy Schardt Riley Mezei, 82, of Clearwater, Florida passed away on November 14th, 2021. She was born on May 2nd, 1939, in Buffalo, NY to the late John P. & Ignatia (Spagnola) Schardt, who were of Italian and German heritage and emigrated just a generation earlier. Beth, as she was known, grew up and was educated in St. Agatha's Parrish where she remained active and also held leadership positions. While raising six young children and working full time, she completed her LPN and RN degrees. She had a career of helping and assisting the sick and people in general in hospitals and with the American Red Cross. As an avid cook and baker, her family was never without Christmas Cookies until February and canned goods to last the long winter months in Buffalo. She moved to Clearwater, FL in the mid 1990's where she continued to help others and do the things she loved. In addition to her parents, Beth is preceded in death by her first husband John (Jack) J. Riley Sr., her brother John Schardt, and niece Joann. She is survived by her husband Joseph Mezei and his extended family, sons, John (Jack) Riley Jr. and his wife Vicky; Christopher (Chris) Riley; Kevin Riley and his wife Rose; Robert (Bob) Riley and his wife Donna; Richard (Rich) Riley, and her daughter Annmarie Riley Cannan, as well as her sisters, Rosemary (Jack) O’Halloran, Barbara Schardt, and Susan (Timothy) Schrader. Beth also leaves behind 13 grandchildren, including Taylor, Jennifer, Samantha, Ryan, Jenn, Kevyn (Andrew Walls), Karli (Laith Matalka), Kimberly Riley Claybolt, Brayden, Dawson, Jennipher (Michael Riggs), Jacqueline, and Joseph, and 6 great-grandchildren Riley, Caluem, Harper, Odin, Karis O’Neill, and Kayla O’Neill. She is also survived by nieces and nephews Mary Beth (Galen R. Stewart), Trisha Glick, John (Jack) & Maureen, Frank, Thomas (Colleen), Timothy (Christina), Joy, Jeffery, and Eric as well as many great nieces and nephews. A memorial service will be held in Buffalo, New York on May 5th, 2022, at Holy Family Parish at 9:30 AM followed by interment at Holy Cross Cemetery. A Celebration of Life will be held after the burial at Alton’s Restaurant located at 2221 Transit Rd Elma, NY. In lieu of any flowers, donations are to be made to Meals on Wheels Tampa, Florida.

Elizabeth (Beth) Joy Schardt Riley Mezei, 82, of Clearwater, Florida passed away on November 14th, 2021. She was born on May 2nd, 1939, in Buffalo, NY to the late John P. & Ignatia (Spagnola) Schardt, who were of Italian and German heritage... View Obituary & Service Information

The family of Elizabeth Joy Schardt Riley Mezei created this Life Tributes page to make it easy to share your memories.