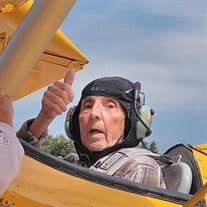 It is with great sadness that we share with you that Gerald F. “Jerry” Attanasio reunited with his adored wife, Adeline, on February 9, 2022 at the age of 94. Jerry and Adeline enjoyed over 60 happily married years together earthside and will now spend eternity together. Jerry was born May 22, 1927 and at age 17 he asked permission from his parents to join the military. He proudly served his country in the United States Navy during WWII and then again in the Korean War. He told many stories of his years of service, his fellow Patriots and his travels. On September 23, 2021, Jerry was surprised and honored by Dream Flights with a flight on a Boeing Stearman biplane, the same aircraft used to train many military aviators in the late thirties and early forties. Our local news station covered Jerry’s flight and filmed him as he recanted memories of his time as a tail gunner during WWII. It was a magical day for him with friends and family in attendance. After his discharge from the Navy, Jerry pursued a career at Marotta Controls in New Jersey as a mechanic maintaining the smooth operation of the equipment in the machine shop and ultimately retired from there after several decades. The simplest pleasures in life brought great joy to Jerry. He loved “all you can eat” crab leg dinners and banana split ice cream sundaes, but don’t dare forget the ‘syrupy walnuts’! He enjoyed fishing and boating with his children and especially loved crabbing in the Northeast. His sweet personality was contagious to everyone he met and his loveable demeanor was not only a joy but an inspiration to all. Jerry had a bright sense of humor and sometimes surprised us all with the things he would say. Jerry is survived by his children, Jerry and his wife Pamela, Gail and her husband John, and Gregg and his girlfriend, Caroline. He is also survived by six grandchildren, Jeremiah, Jacob, Joshua, Kenny, Brian and Courtney and ten great grandchildren, Jared, Miranda, Rebecca, Nyah, Corinne, Quintyn, Julianna, Gabrielle, Annabelle and Kai. In addition, Jerry has two beautiful great, great grandchildren, Olivia Rose and Michael Liam. He will be missed by all! Lastly, we want to extend our profound gratitude to everyone at Suncoast Hospice and especially to Jerry’s nurse, Lisa Ventimiglio, who, for the past year treated Jerry with abundant kindness and love as she protected his decision to live and die on his terms. Visitation Sunday February 27, 2022 at Moss Feaster Funeral Home, 1320 Main Street Dunedin, FL 34698 at 11am A live webcast of the service will start on Sunday 2/27 at 12 pm at http://webcast.funeralvue.com/ EVENT ID #69909, no password required. In lieu of flowers the family requests that a donation be made to Dream Flights in memory of Jerry. Link below: https://dreamflights.org/donate/

It is with great sadness that we share with you that Gerald F. &#8220;Jerry&#8221; Attanasio reunited with his adored wife, Adeline, on February 9, 2022 at the age of 94. Jerry and Adeline enjoyed over 60 happily married years together earthside... View Obituary & Service Information

The family of Gerald F Attanasio created this Life Tributes page to make it easy to share your memories.

It is with great sadness that we share with you that Gerald F....

Send flowers to the Attanasio family.