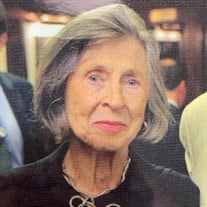 Jacqueline Latimer passed away at age 97 on February 24th, 2022, in Clearwater, Florida. Born Jacqueline Helen Shaner to Ronald Calvin Shaner and Twila Say Shaner on March 29, 1924, in Knox, Pennsylvania, the eldest of three daughters, she and her family relocated to Portville, New York when she was 10 years old. She attended Portville High School and later graduated from Beaver College in Jenkintown, Pennsylvania in 1946. Jacqueline married William Howard Kemp of Chicago, Illinois on October 16, 1946. Widowed in 1954, Jacqueline left Chicago to return to Portville to raise her two daughters. During this period of her life she visited her sister Jane and husband Jim who were living in Europe. Her time in Italy and Greece made a lifelong impression, inspiring her passion for European culture. She married Thomas P. Latimer of Olean, New York in 1958, and they enjoyed a life of international business and pleasure travel and resided in Ohio, Chicago, and ultimately New York City. In 1975 Jacqueline fell in love with Bellport, New York, a small historic whaling village on the south shore of Long Island, where she purchased a bayside home. Here, every summer, she loved hosting her children and six grandchildren, and eventually nine great-grandchildren. After retirement, the couple divided their time between New York City, Bellport, and Clearwater Beach, Florida. Jackie will be remembered for her zest for life, flair for fashion, love of travel, cooking skills, and the hours she spent gardening. Her ability to recite hundreds of classic poems from memory, and her singing of numerous silly songs was endlessly entertaining. Her grandchildren will never forget her animated readings of fairy tales and fables. Jackie never heard a song or tune that she didn't want to dance to. She is survived by two daughters, Carol Brabbee (Rick) and Margaret Wolfe, six grandchildren, Andrew Brabbee (Minette), Kristen Wolfe Bieler (Charles), Katherine Wolfehagen (Paul), Allison Spence (Chris Scot), Alex Brabbee and Laura Wolfe; nine great-grandchildren, and her sister, Ronda Pollock. She was predeceased by her sister, Jane Whitmore and her second husband, Thomas Latimer. The family wishes to thank the staff of Madonna Ptak for their kind and compassionate care of Jackie for the past few years. Arrangements are being made by Moss Feaster Funeral Home in Clearwater, Florida and Guenther Funeral Home in Portville, New York. The family is planning a joint celebration of life for both Tom and Jackie in Portville, New York over the 2022 Labor Day weekend.

Jacqueline Latimer passed away at age 97 on February 24th, 2022, in Clearwater, Florida. Born Jacqueline Helen Shaner to Ronald Calvin Shaner and Twila Say Shaner on March 29, 1924, in Knox, Pennsylvania, the eldest of three daughters, she and... View Obituary & Service Information

The family of Jacqueline S Latimer created this Life Tributes page to make it easy to share your memories.

Send flowers to the Latimer family.