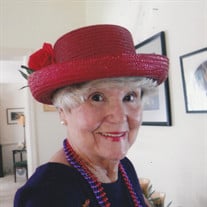 Lianne Anderson Doglione, 87,left her earthly home on March 31,2022 to join loved ones in her Eternal Home. Lianne was born in Yonkers,NY.on October 10th and lived in Hastings on Hudson until she graduated from high school.Her parents were Viola and Walter Anderson and she had one sibling,Brother Ted who was born on her birthday four years later. Since their mother died when they were children, Lianne and Ted remained the closest of family, supporters and protectors of each other through out their lives. Lianne met Johnny Doglione at New Paltz College as a freshman where he was her roommate's date. They had an immediate attraction became engaged and married within the year on June 30 1954, Shortly thereafter John received his Air Force Commission and they moved to Houston TX to begin their 30 year career of service to their country. Lianne was the perfect officer's wife leading the base families under John's command.She used her artistic skills in producing base news letters and was the center of many acts of generous hospitality for the families. While stationed in Japan she was frequently mistaken for the popular movie star, Doris Day. Lianne obliged with autographs. The Dogliones had two beautiful,service oriented children,John David and Dea Lianne (deceased) Lianne and John were happy at the numerous bases they served but most ecstatic at their final posting at McDill in Tampa where upon they chose Dunedin in 1984 as their forever home. Lianne served as President of The Fairway Estates Women's Club several times and John chose Community Service.He served many years as City Commissioner and then became Mayor of Dunedin. During these years they were fortunate to spend quality time with their granddaughter Kayla Pepper who resided in California. Kayla traveled extensively with them to Sterling, Scotland and Somerset, Prince Edward Island,sister cities for Dunedin. They drove through much of the US and enjoyed many cruises together. John passed away in 2006 and Lianne spent time with her Fabulous Five Girl Friends and family. Lianne is survived by son David (Saida) his children Chris and Missy; Granddaughter Kayla Coates ( Doobie) their children Calloway and Goldyn Lianne; Brother Ted (Jo) and children Scott, Terri and Tina and Walter; sister-in-law Dee Smart ( Tom), Cousin Louise Andres and several nieces and nephews. Lianne lit up rooms, brought smiles to faces, entertained generously, gardened gratefully and left a lovely foot print on this earth. There will be a private graveside service at Dunedin Cemetary conducted by Moss Feaster and officiated by Rev.Jason Knott of First UMC Dunedin. The family is grateful to Meese Magnolia Memory Care, Suncoast Empath, Kevin Donoghue and dear friends Dr and Mrs Ken Reinhold.

Lianne Anderson Doglione, 87,left her earthly home on March 31,2022 to join loved ones in her Eternal Home. Lianne was born in Yonkers,NY.on October 10th and lived in Hastings on Hudson until she graduated from high school.Her parents were Viola... View Obituary & Service Information

The family of Lianne A. Doglione created this Life Tributes page to make it easy to share your memories.

Send flowers to the Doglione family.