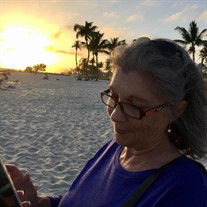 It is with deep sadness to announce that Marijo Ann McKown Beck passed away peacefully in her home on October 31, 2021. She was the daughter of the late Duncan and Gloria McKown of Dunedin, FL. Marijo was a beloved sister, aunt, cousin and friend to many who were fortunate and blessed to know her. Marijo was born in Chicago August 6, 1954 and moved to Dunedin, FL with her family in 1965. She attended Dunedin Middle School, graduated from Dunedin High School in 1972 and completed her A.S. degree in Business/Accounting from St. Petersburg College. Marijo began her career at the age of 16 working for Southern Nuclear Science. She became a valued part of their team and transitioned with the group as they grew and expanded operations through the years. Marijo worked for major consulting firms, such as SAIC, as well as other companies in later years . She was ultimately known as a problem solver. Marijo was an expert in and was sought after for her skills troubleshooting, resolving and turning around troubled business operations. Marijo was well known and deeply loved by many. She valued everyone she met and had the unique ability to remember everyone. Marijo had a big heart and was always there to help whether they were family or friend. It did not matter. She was always there. Marijo had a unique sense of humor, boundless energy (which she credited to her 35 years of Jazzercise), a warm smile and twinkle in her eye. Her impact on her family and friends was and still is very powerful. Marijo will always be loved and never forgotten. Marijo is predeceased by her parents, brothers Michael and Dan McKown and the love of her life Kenneth David Kirby. She is survived by her sisters, Karen Glassner and Lori Charon; her brother, William M. McKown; sisters-in-law, Amanda McKown and Sharon McKown; brother-in-law, James Charon; and many nieces, nephews and cousins whom she loved dearly. Our family is planning a private “Celebration of Life” gathering in memory of Marijo. We only ask for your thoughts and prayers. In honor of Marijo, the family requests that any donations be made to a cancer charity or animal rescue charity of choice.

It is with deep sadness to announce that Marijo Ann McKown Beck passed away peacefully in her home on October 31, 2021. She was the daughter of the late Duncan and Gloria McKown of Dunedin, FL. Marijo was a beloved sister, aunt, cousin and friend... View Obituary & Service Information

The family of Marijo Beck created this Life Tributes page to make it easy to share your memories.

It is with deep sadness to announce that Marijo Ann McKown Beck...

Send flowers to the Beck family.