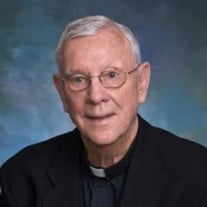 We were saddened to learn that Reverend Patrick “Eric” Hunter, 76, a retired priest of the Diocese of St. Petersburg, passed away in the Lord in the early morning hours of Monday, January 11, 2021, while under Hospice care at his residence in Largo. Father Hunter was born in Coatbridge, Scotland on December 17, 1944, to Neil and Mary (Rice) Hunter. Following elementary and secondary school studies with the Mill Hill Fathers, in Ayrshire, Scotland, he attended college in England. In 1967, following graduation from college, where he discerned a calling to the priesthood, he began his studies in philosophy at the Pontifical University of Salamanca, Spain, and theology studies at the Missionary Institute of London, England. He was ordained to the priesthood in Scotland on April 22, 1972, for the Society of the Crusade of the Holy Spirit. In September 1975, by agreement with his superior, and at the request of Bishop Charles McLaughlin, Father Hunter arrived in the Diocese of St. Petersburg, where he provided assistance to Light of Christ Parish, Clearwater. He was later appointed Associate Pastor (Parochial Vicar) of the parish. From 1983 to 1985, he served as Parochial Vicar of Holy Cross Parish, St. Petersburg. During that time, he was incardinated into the Diocese of St. Petersburg in 1984. In 1985, Father Hunter was appointed as Administrator of St. Clement Parish, Plant City, and was installed as Pastor of the same parish in 1988. The following year, Father Hunter was transferred to Incarnation Parish, where he served as Pastor of the growing west Tampa community for 20 years. In July 2009, he was assigned as Pastor of St. Brendan Parish, Clearwater, where he remained until his retirement in June 2019. Father Hunter was preceded in death by his parents, Neil and Mary, and his sister, Ellen. Surviving family members include his brother, Thomas, two sisters, Maureen and Anne, and ten nieces and nephews. A Funeral Mass will be held on Saturday, January 16, 2021, 11:00 a.m., St. Brendan Catholic Church, 245 Dory Passage, Clearwater Beach. Bishop Emeritus Robert N. Lynch will be the principal celebrant. Priests wishing to concelebrate are invited to bring an alb and white stole. For those unable to attend in person, the Funeral Mass will be broadcast via livestream video on the St. Brendan Parish website: http://www.stbrendancatholic.org/. Burial will follow immediately at Calvary Catholic Cemetery, 5233 118th Avenue N., Clearwater. Expressions of sympathy may be sent to the family of Rev. Eric Hunter, in care of the Diocese of St. Petersburg, Office of the Chancellor, P.O. Box 40200, St. Petersburg, FL 33743-0200. Please keep Father Hunter’s family members and loved ones in your kind thoughts and prayers during this difficult time. Well done, good and faithful servant […] Come, share your master’s joy” (Matthew 25:21).

We were saddened to learn that Reverend Patrick &#8220;Eric&#8221; Hunter, 76, a retired priest of the Diocese of St. Petersburg, passed away in the Lord in the early morning hours of Monday, January 11, 2021, while under Hospice care at his... View Obituary & Service Information

The family of Reverend Patrick Hunter created this Life Tributes page to make it easy to share your memories.

We were saddened to learn that Reverend Patrick “Eric” Hunter,...

Send flowers to the Hunter family.